Home Page > Texas prisons, we’ve got some questions about your...

Texas prisons, we’ve got some questions about your commissary vendors

In a follow-up to our commissary report, we look at Texas commissary vendors and discover some surprising findings alongside the usual suspects.

One of the original inspirations for our report on prison commissaries earlier this year was a 2010 article from the Texas Tribune that analyzed $95 million in purchases at prison commissaries in the previous fiscal year. Because of the solid information already contained in the Tribune article, we chose not to use Texas as one of our sample states. But given the size of the Texas prison system, it seemed important to conduct some kind of review of commissaries in the Lone Star State.

This time, we looked at the sources of goods rather than spending patterns among incarcerated people, and discovered a couple of surprising findings alongside the usual major vendors.

Using spending data available through the office of the Texas Comptroller, we were able to get a sense of where the state prison system buys commissary goods. Although there is no way to isolate commissary spending specifically, the Texas Department of Criminal Justice (TDCJ) lists its expenditures by category. One expense category is “cost of goods sold–merchandise for resale,” and it’s a reasonable guess that all or nearly all of this spending is for commissary inventory.1 In Fiscal Year 2017, TDCJ reported $77.6 million in purchases in the merchandise-for-resale category, which is roughly in line with what one would expect to see in a system that generates around $100 million in annual sales.

Even though the purchasing data is only broken down by general category, there are a few observations and questions that emerge: 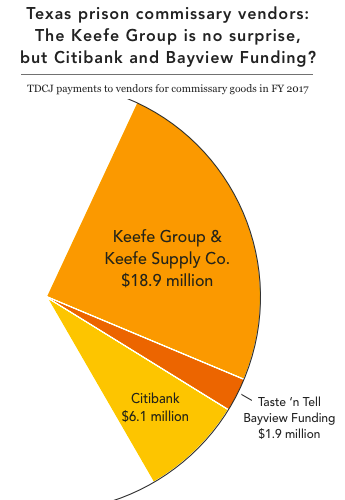 Factoring by Taste ‘n Tell is a bad sign. Factoring is generally more expensive than traditional business financing options like bank loans. As a result, it is often used by new companies that lack a track record of profitability, or by companies in financial distress. Taste ‘n Tell is not particularly new (it was formed in 2008), but its financial affairs do look a bit rocky. Public records show that the company has been on the losing end of five lawsuits since 2012, with total judgments reaching almost $200,000. The company’s apparent owners have both filed personal bankruptcy petitions in the past, and the company’s headquarters appears to be a private residence in St. Louis.

Taste ‘n Tell’s use of factoring matters because it likely impacts the prices it charges TDCJ, which in turn impacts the prices charged to incarcerated people through the commissary. Are people in Texas prisons paying inflated prices in order to help Taste ‘n Tell get quick cash from a factoring company? That requires a closer look at what TDCJ is buying.

A sampling of invoices from FY 2017 shows that TDCJ purchases hygiene and food products from Taste ‘n Tell. Many of these items are not sold to the general public, making price comparisons difficult, but there are a couple of items that allowed us to shop around. First, in June 2017, TDCJ bought approximately 265,000 Femtex brand tampons (in cases of 480) from Taste ‘n Tell, for $45 a case (or 9¢ per tampon). The same brand of tampon retails for basically the same price on Amazon. The second example comes from June 2017 when TDCJ ordered 1,200 cases of Encore Premium garlic powder (12 bottles per case) for $9.24 a case (or 77¢ per bottle). The same brand is available for less (69¢ per bottle) to others who order in bulk from a wholesaler.

So why is Texas doing business with Taste ‘n Tell? Available data suggests that Taste ‘n Tell isn’t providing bargains. So why else would TDCJ be doing business with a small company that has a track record of not paying its bills? It’s hard to say. Perhaps Taste ‘n Tell satisfies some procurement quota for small or minority-owned businesses. Maybe the company is owned by people who have the right political connections. Or Taste ‘n Tell could actually have submitted the lowest bid.

Whatever the reason, the Taste ‘n Tell example is another reminder that commissary customers can’t hunt for the best price–they are captive to purchasing managers who often end up signing off on head-scratching deals like the Taste ‘n Tell purchases.