We produced a map to illustrate the ACLU’s testimony against a counterproductive zone law.

The Michigan ACLU testified yesterday against a bill proposing counterproductive and ineffective restrictions on where people on the sex offender registry would be allowed to “loiter”. This bill would expand the current restrictions to also include all areas within 1,000 feet of a day care center, creating “a nearly impossible burden on listed offenders and on law enforcement.” Here at the Prison Policy Initiative, we produced a map to illustrate the ACLU’s testimony by demonstrating that the simple-sounding law would blanket dense urban areas with a confusing pattern of imperceptible zones. 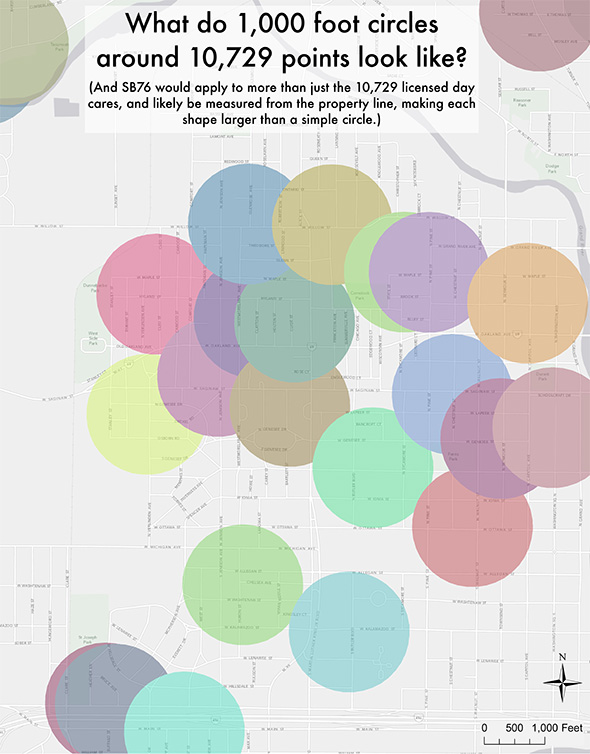 Our map showing that most of the Michigan capital city of Lansing is within 1,000 feet of just two dozen of the 10,729 day care centers in the state.

Litigator Kung Li stopped by our office in August to talk about her experience working with us on the Southern Center for Human Rights’ Whitaker v. Perdue case.

We’ve also prepared similar analysis for court cases in Colorado, Georgia, Massachusetts and elsewhere. This work grew out of our research on sentencing enhancement zones, the drug laws that give enhanced penalties based on where an offense occurs, not on its dangerousness. These laws are all too common, and the basic differences are the number of protected places, the distances involved, and how that distance is to be measured.

In all the cases we’ve looked at, a few key points about geography and geometry keep coming back:

Most importantly, however, the laws that fail to work as intended share the same fundamental flaw of covering too much area. This might sound like it would produce more safety but it actually produces less for the simple reason that when you make everywhere special, nowhere is special.