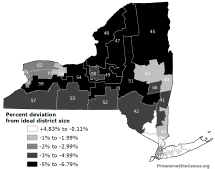 Without prisoners as "residents", seven upstate counties would have insufficient populations and would be force to merge. In 10 upstate New York counties, 60% or more of Black "residents" are incarcerated.

When someone is sent to prison, there are certain rights they're expected to lose. Their freedom is stripped away and so is their right to vote.

But for more than 36,000 Blacks incarcerated in New York State, a prison sentence may have deprived them of something else as well: their legal residence.

Despite the fact that the New York State Constitution explicitly states that "no person shall be deemed to have gained or lost a residence by reason of his presence or absence...while confined in any public prison," the 2002 New York State redistricting process did exactly that to more than 43,000 New York City residents incarcerated upstate.

"This is a grotesque injustice in the way that communities are disenfranchised," said Eric T. Schneiderman, deputy minority leader of the New York State Senate.

Last February, Schneiderman, who represents parts of the Bronx and New York counties, introduced legislation that would require future redistricting to be based on a prisoner's last known address, replacing the current practice of using federal census counts, which tally non-traditional populations - like prisoners - essentially by where they slept on the night of the census.

But while the current districting process violates the New York State Constitution, the 2002 redistricting plan did pass muster with the Department of Justice, partly because compliance with the 1965 Voting Rights Act only requires that redistricting not be "retrogressive."

Yet the conflict between federal and local assessments of residence has produced some impressive paradoxes in the counties where prisons are located. For example, Franklin County, which borders Canada, excludes prison populations when determining its internal districts, but the federal census includes prisoners in Franklin's county-wide population. On the state level, the prisoners exist as residents; on the local level they do not. Research has shown that this counting contradiction exists in approximately one-third of prison districts in New York State.

But the issue extends past the boundaries of the districts and counties that house the prisons. The fundamental problem is that counting prisoners as residents means that the number of actual constituents in prison counties is lower, and therefore each of those constituents' vote is effectively worth more than the vote of someone in another county.

In Franklin County, it was figured that "the vote of 8 residents near the prisons [is] worth as much as 10 residents elsewhere in the county."

Eric Stowers, political Director of the Downtown for Democracy Political Action Committee, which has organized around this issue, points out that "anyone not in a prison district is being hurt."

On the state level, Schneiderman said that he is "very optimistic" about the future of the redistricting issue in the Legislature. But just in case, he and the non-profit coalition New Yorkers for Equal Representation have secured the firm of Boies, Schiller and Flexner, which has tried cases against Microsoft and President Bush, among others, to file a pro bono lawsuit against the state.

Meanwhile Wagner and his associates are lobbying for changes to federal census methods, presenting testimony this past June to the body charged with reviewing census residence rules. According to Wagner, changing the census rules is the best solution both because it would make general research easier and because "this is definitely a problem in every state."