Some state officials call for redistricting 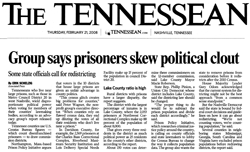 Tennesseans who live near large prisons, such as those in Metro Council District 20 in west Nashville, wield disproportionate political power when voting for members of their counties’ lawmaking bodies, according to an advocacy group’s report released today.

Northampton, Mass.-based Prison Policy Initiative argues that voters in the 10 districts that house large prisons are given an unfair advantage in county politics.

“This census glitch creates big problems for counties,” said Peter Wagner, the nonprofit group’s executive director. “When counties rely on flawed census data, they end up diluting the votes of all their residents who don’t live near a prison.”

In Davidson County, for example, the 2,569 prisoners at the Charles Bass Correctional Complex, Riverbend Maximum Security Institution and Lois DeBerry Special Needs Facility make up 15 percent of the population in council District 20.

Rural districts with prisons have a larger disparity, the report suggests.

The district with the largest percentage of inmates is in Lake County, where the 2,053 prisoners at Northwest Correctional Complex make up 88 percent of the population of about 8,000.

“The proper thing to do would be to subtract the prison population and divide each district accordingly,” he said.

Prison Policy Initiative, which researches criminal justice policy around the country, is calling on county officials and state lawmakers to lobby the Census Bureau to change the way it collects population data. The group also wants the state to remove prisons from consideration before it redistricts after the 2010 Census.

House Majority Leader Gary Odom acknowledged that the current system for districting might not be the best approach “from a common sense standpoint.”

But the Nashville Democrat said the state is bound by federal court decisions and guidelines on how it can go about redistricting. “We’re not counting voters, we’re counting population,” he said.