Home Page > Blog > New report and infographic: How does your state’s use of...

New report and infographic: How does your state’s use of prison compare to the nations of the world?

Prison Policy Initiative's new report, "States of Incarceration: The Global Context 2016," compares the incarceration rates of individual U.S. states to that of other countries.

Easthampton, MA — How does your state compare to the international community when it comes to the use of incarceration? Not very well, says a new report and infographic by the Prison Policy Initiative.

“When compared against each other, some U.S. states appear to be far more restrained in their use of incarceration than high incarcerators like Louisiana,” said Peter Wagner, Executive Director of the Prison Policy Initiative and co-author of the report. “But all U.S. states are out of step with the rest of the world.” 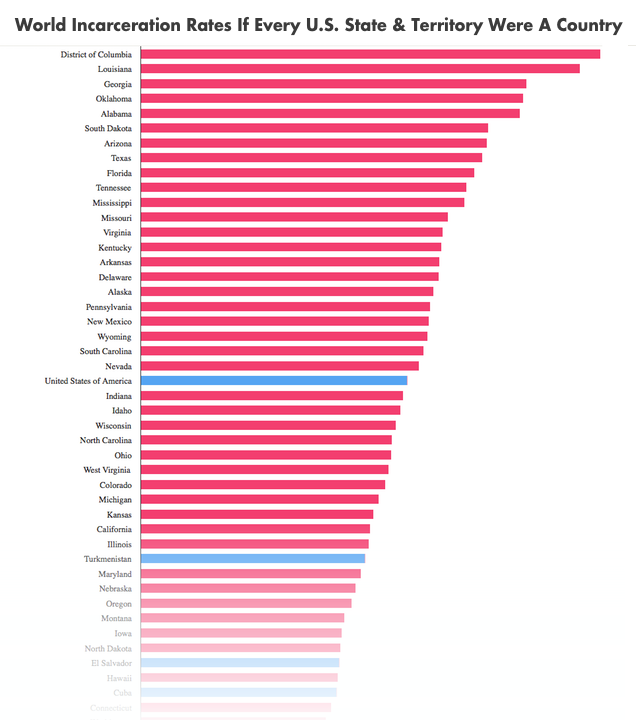 This report, “States of Incarceration: The Global Context 2016,” updates our 2014 briefing that, for the first time, directly situated individual U.S. states in the global context.

“Massachusetts and Vermont have the lowest incarceration rates in the U.S.,” said Alison Walsh, report co-author and Policy & Communications Associate. “Compared to Louisiana, these states look progressive. But if these states were independent nations, they would rank as the 11th and 12th greatest users of incarceration on the planet, following the United States and a group of nations whose recent history often includes wars, military coups and genocides.”

“I hope that this data helps all states prioritize further criminal justice reforms. Lower incarceration rates are not only possible, in the rest of the world they are a reality,” said Wagner.

The report and infographic draw international figures on incarceration from the Institute for Criminal Policy Research’s World Prison Brief and state-level figures from the Bureau of Justice Statistics, the Bureau of Prisons and the U.S. Census Bureau.

The Easthampton, Massachusetts-based Prison Policy Initiative was founded in 2001 to expose the broader harm of mass criminalization and spark advocacy campaigns to create a more just society. The organization is most well known for sparking the movement to end prison gerrymandering and for its big picture data visualization “Mass Incarceration: The Whole Pie.”

The report, “States of Incarceration: The Global Context 2016,” is available at:
http://www.prisonpolicy.org/global/2016.html