Virtual jail "visits" are quietly sweeping the country. Fortunately, a surge of hard-hitting journalism is pushing back, illuminating the exploitative practice of eliminating family visits in favor of video calls. 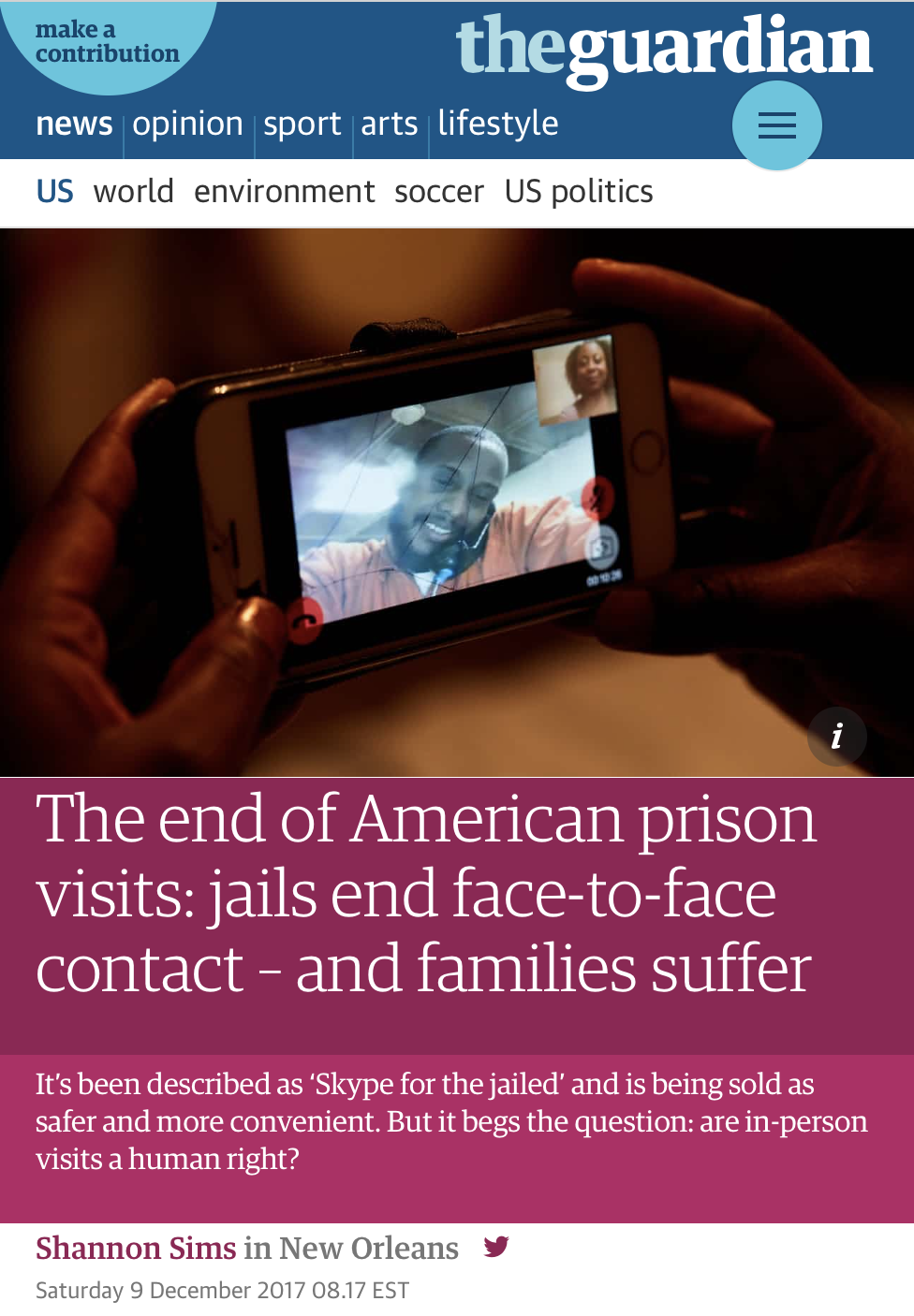 In Shannon Sims’ deep dive into the video calling industry for The Guardian, she investigates the switch from in-person family visits to expensive video calls in one jail outside of downtown New Orleans:

The guards tell me they think the new system will be an improvement – “it’s better because you can do a video visit from home now” – but since it is so new, they can’t say for sure.

They suggest I check out the new “Video Visitation Center”, located about a 10 minute drive down the freeway. For those without access to a smartphone or a computer, the new visitation center is their only option.

There, an old elementary school building has been converted into the center. Inside, three guards are gathered and laughing around a cellphone behind a glass wall, but outside the parking lot is empty. No one is visiting.

As we’ve detailed before, it’s unlikely that people will actually enjoy driving to a jail or offsite terminal just to visit with a computer screen – the entire experience is dehumanizing. But video calling from home – at $12.99 per call – wasn’t much better for Tiffany Burns, who Sims visited as she was attempting to receive a home video call from her boyfriend Chrishon Brown:

“OK, so he is supposed to call in eight minutes I guess,” she says, staring at her phone, which blinks 6.52pm.

This is her third attempt to video chat with Brown. The first time, she did not know she needed to schedule the call far ahead of time, and the second time, all the slots were filled for the days she was off work. Now, with her slot scheduled and her earphones in, she’s wondering if it will all work out.

Finally, she sees a call coming through.

Her face lights up and then slowly fades as she realizes Brown can’t hear her. She fiddles with her headphones, waves, tries gesturing to him, but ultimately, he never can hear her voice. The two end up simply giggling at the screen image of each other for the remainder of the time.

Later, I speak with Brown by phone and he explains that he believes he was only the third inmate to try to use the video program at the Jefferson Parish jail, and that the other two also said it didn’t work properly.

“We had to pay money for something that didn’t work,” he complains. “I couldn’t even hear what she was saying, and I couldn’t really see her.”

A thousand miles away in Denver, Colorado, Michael Sakas of Colorado Public Radio explores the emotional toll that eliminating in-person visits has taken on one mother’s incarcerated son, who has attempted suicide multiple times while behind bars:

Since 2005, the only way to speak to an incarcerated person in Denver’s jails has been through video chats. But a new movement, sparked by grassroots leaders and a report from Denver’s Office of the Independent Monitor, is putting pressure on the local sheriff’s office, which is now considering a reinstatement of in-person visits. The downtown detention center was built without visitation space, which would make reinstating visits expensive, according to jail division chief Elias Diggins. But the city is moving forward with a $1.4 million dollar contract to update the video calling system.

“Can you imagine being in a cell all by yourself, and only being out for a couple of hours everyday? I mean, I couldn’t handle it. Could you?”

The Guardian‘s article raises another important point that we haven’t raised in our own work or seen raised elsewhere: does international human rights law require jails to allow in-person visitation?

“Internationally, multiple legal instruments indicate that it [does]. UN rules call for the allowance of visitors, while the European Prison Rules emphasize that while all forms of visitation may be monitored, maximum contact is the underlying goal: ‘Prisoners shall be allowed to communicate as often as possible by letter, telephone or other forms of communication with their families, other persons and representatives of outside organisations and to receive visits from these persons.'”

This reminder about international human rights law adds an international layer to the clear national consensus — including agreement from editorial boards, public citizens, professional organizations, and policymakers — that erecting unnecessary barriers between incarcerated people and the outside world is bad policy. It’s time for American sheriffs to join the rest of the country, and the world.