Home Page > Blog > New report, Getting Back on Course, shows that prison...

New report, Getting Back on Course, shows that prison permanently hinders education

Our criminal justice system isn’t just sending people from school to prison – it’s locking them out of education altogether.

It’s common knowledge that the U.S. criminal justice system funnels youth from schools to prisons – but what happens after that? How many people, for instance, are able to finish high school during or after prison? A new report from the Prison Policy Initiative breaks down the most recent data, revealing that incarcerated people rarely get the chance to make up the education they’ve missed.

The data shows how incarceration, rather than helping people turn their lives around, cements their place at the bottom of the educational ladder: 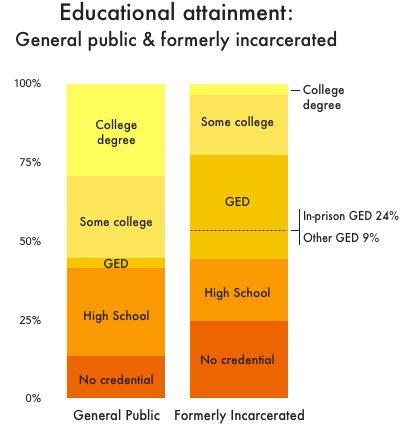 The unemployment rate for formerly incarcerated people is a staggering 27%, the Prison Policy Initiative previously found. This rate differs by education level. For those returning home from prison without educational credentials, it is “nearly impossible” to find a job:

Today’s report is the third and final part of a new series from the Prison Policy Initiative, focusing on the struggles of formerly incarcerated people to access employment, housing, and education. Utilizing data from a little-known and little-used government survey, Couloute and other analysts describe these problems with unprecedented clarity. In these reports, the Prison Policy Initiative recommends reforms to ensure that formerly incarcerated people – already punished by a harsh justice system – are no longer punished for life by an unforgiving economy.