Advocates for prison reform and some New York politicians are pushing efforts to change the way prison inmates are counted — a change which, if it occurs, could have a significant effect on the state’s political map. 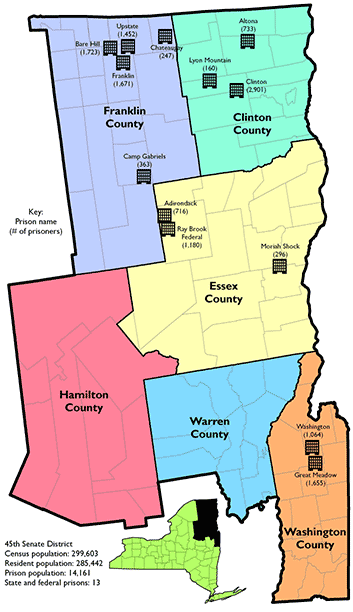 The effort is particularly relevant in the North Country, especially in the six local counties that make up Elizabeth Little’s 45th Senate district. With 13 prisons, the 45th has the most of any state Senate district.

Those 13 prisons house more than 14,000 inmates, all of whom get counted as residents. Without the prisoners, the district’s population would fall below the minimum allowable level, which would mean it would have to expand, perhaps by swallowing the northern end of Saratoga County.

Other upstate districts with large prison populations face the same issue, and the cumulative effect could redraw the political map with fewer districts upstate and more downstate.

Republicans now hold a slight edge in the Senate, while Democrats dominate the Assembly.

As long as Republicans control the Senate, Schneiderman’s proposal is unlikely to pass, although its supporters say it’s a matter of fairness, not politics.

“You have all these people and they’re not being represented at all,” said Alice Green, executive director of the Center for Law and Justice, an inmate advocacy group in Albany.

“Counting prisoners as residents of the prison districts where they do not vote or otherwise participate in those communities is simply bad policy,” Schneiderman said. “Disenfranchised people become an undeserved source of political power for legislators who benefit from locking up more people for longer sentences.”

In addition to pushing for policy changes in New York, the reformers seek to pressure the Census Bureau to change the way it counts prisoners nationwide.

“The bureau’s current practice made sense before prison populations became large enough to distort democracy,” said Peter Wagner, director of the Prison Policy Initiative, based in Northampton, Mass. “However, more people now live in prison than our three least populous states combined, and African Americans are imprisoned at seven times the rate of whites.”

In New York, the 45th is already the largest district in the state, said Little, who spends much of her time in the car traveling to events that can be 100 or more miles apart.

“I don’t get any reimbursement for driving all over my district,” she said. “Schneiderman can practically walk around his.” Little’s district includes six entire counties — Clinton, Essex, Franklin, Hamilton, Warren and Washington.

Thanks to the political clout of the 45th’s former senator, the late Ron Stafford, many of the prisons built by the state over the last few decades — places like the Shock Incarceration Camp in Moriah and Upstate Correctional in Malone — have been placed among the forests and lakes of the 45th.

Wagner, of the Prison Policy Initiative, points out that, when North Country political leaders draw up their in-county voting districts, they subtract inmates from their counts.

County leaders say they don’t want to base local political power on prisoners who don’t participate in the political or social life of their communities.

The law points out that, were the approximately 1,900 inmates in the town of North Elba included in the local count, they would make up about 22 percent of the town’s population.

The Census Bureau has traditionally counted prisoners as living at the prisons where they’re incarcerated on the day of the census.

Advocates for changing the custom point out that some state constitutions seem to forbid it.

New York’s constitution states, “No person shall be deemed to have gained or lost a residence, by reason of his presence or absence … while confined in any public prison.”

But Little pointed out that other temporary populations, such as nursing home residents and college students, are also counted where they are living on the day the census is taken.

She characterized the push to change census policy as a power grab, with Democrats trying to take control of every branch of state government.

With a Democratic governor, Eliot Spitzer, and with Democrats already controlling the Assembly, Democrats could, if they also gain a majority in the state Senate, redraw all the state’s districts to favor their party, she said.

And, Little added, if they were in control of each branch, Democrats would be able to redraw not only the state districts, but the U.S. congressional districts, too. “They could redraw congressional lines,” she said. “That’s the big one.”