"The Crisis" reports on how rising incarceration is spilling over into critical arenas of black political and economic power. 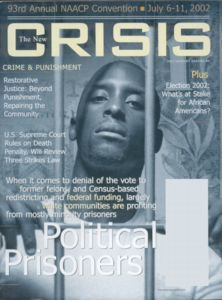 The cover article of July/August, 2002 issue of “The Crisis” Magazine, (NAACP national publication) is on how rising incarceration is spilling over
into critical arenas of black political (electoral) and economic power, i.e. affecting the lives of African-Americans not under criminal justice control. Key issues focused on are felony disenfranchisement and the impact of census prisoner-counting practices on redistricting, as well as the relationship between those phenomena and post-reconstruction initiatives designed to take away from the newly enfranchised what had just been granted…

The article discusses the Importing Constituents: Prisoners and Political Clout report about the census counting urban prisoners as rural residents.

An internet version of the article is not yet available but you can order a hard copy from Crisis Magazine.