We submitted additional comments to the FCC confirming more kickbacks, and urging the FCC to keep protections in place for people in jail.

The prison and jail phone industry has been busy recently, urging the Federal Communications Commission to roll back regulations and allow companies to charge exorbitant rates and fees for calls. Meanwhile, we’ve submitted a few comments of our own, highlighting bloated payment fees and showing that phone services in jails require regulation just like in the prisons.

Although we, and the FCC, have suspected that phone companies take a cut of the fees charged by third party payment services such as Western Union, we were finally able to confirm the practice. On Monday we submitted a comment that documents the kickbacks from Western Union.

The FCC also sought additional information on the differences between jails and prisons, and whether the new phone regulations should protect people from unconscionable prices no matter where they, or their family members, are incarcerated. We demonstrated the industry’s inability to articulate a good reason to roll back regulations of jail phone services, and we urged the FCC to continue its protection for people confined in jails.

We also signed on to reply comments, along with Martha Wright, et. al, The D.C. Prisoners’ Legal Services Project, CURE, and the Campaign for Prison Phone Justice, urging the FCC to regulate fees, in-state calling, as well as tackling other issues.

Show your support for our work with some PPI gear. 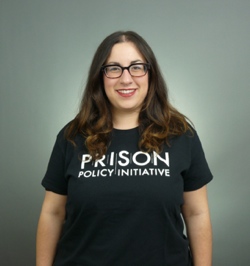 Looking for a new way to proudly show your support for our work to end mass incarceration?

You can now sport a snazzy new Prison Policy Initiative t-shirt (like Elena, at right), spread the word with a bumper sticker about ending prison gerrymandering, or stick a PPI pin on your backpack or magnet on your fridge.

Court orders stay on some of the FCC's new prison phone regulations, but caps on call rates still go into effect on February 11th.

Recently, prison phone companies took the FCC to court for the right to charge the families of incarcerated people exorbitant rates for talking to their loved ones in prison. (Securus Technologies v. FCC and United States of America (D.C. Cir. Docket No. 13-1280)). Yesterday, the U.S. Court of Appeals granted a partial stay of the FCC’s new prison phone regulations, but allowed the new rate caps to take effect on February 11.

Communications Daily reports that the Court

kept in place the interim rate cap of 21 cents per minute for debit and prepaid calls, and 25 cents a minute for collect calls. It put on hold three other sections of the FCC’s rules: the requirement that rates and ancillary services be “cost-based”; low safe-harbor rates that presume charges are reasonable; and the annual reporting requirement.

The article quotes Peter Wagner’s analysis of the order:

It is important that the court left intact the most important and immediate of the FCC’s reforms… [b]ut I’m disappointed that the court stayed three sections of the FCC’s order, including the section that reined in the fees….Those fees can double the price of a call…. With new fairer rates, Global Tel*Link will make far more from deposit fees than from multiple 15-minute calls.

Several FCC commissioners were also disappointed in the ruling, but optimistic. Chairman Tom Wheeler, Commissioner Mignon Clyburn, and Commissioner Jessica Rosenworcel issued a joint statement highlighting how even having the partial regulation remain in effect is still a significant stride toward more reasonable phone bills:

We are pleased that millions of families will finally see relief from outrageous rates for inmate calling services when the interim rate caps… go into effect in February 2014. These families have been forced to pay exorbitant rates for far too long. Although we are disappointed that the court granted a partial stay on other aspects of the Inmate Calling Services Order, we look forward to a hearing on the merits soon, and to adopting further reforms quickly.

We are among the organizations intervening in the lawsuit, stay tuned for updates!

Please come to a Western Massachusetts criminal justice advocates’ meet and greet on 2/11!

Lots of local folks are doing great work to end mass incarceration, and we'd like to create a space where we can connect with each other and strengthen our work.

We are co-organizing, with the Prison Birth Project, a meet and greet event for criminal justice-focused organizations and advocates in Western Massachusetts. Lots of local folks are doing great work to end mass incarceration, and we’d like to create a space where we can connect with each other and strengthen our work.

If you plan to attend, please RSVP so that we can order pizza, arrange childcare, print name tags and make a participant list that we can share with the other attendees.

We’d like to build as many connections as possible, so please forward this information and the RSVP link to any Pioneer Valley advocates who might be interested.

Let us know if you have any questions, and we hope to see you there! 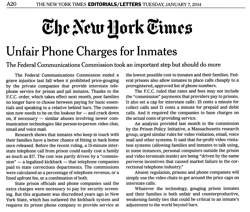 The commission now needs to be on the lookout for — and crack down on, if necessary — similar abuses involving newer communication technologies like person-to-person video chat, email and voice mail.

The editorial cites our recent submission to the FCC detailing why it should keep an eye on the prison and jail video communication and email markets:

An analysis provided last month to the commission by the Prison Policy Initiative, a Massachusetts research group, urged similar rules for video visitation, email, voice mail and other systems. It said that for-profit video visitation systems (allowing families and inmates to talk using, in some instances, personal computers outside the prison and video terminals inside) are being “driven by the same perverse incentives that caused market failure in the correctional telephone industry.”

Absent regulation, prisons and phone companies will simply use the video chats to get around the price caps on interstate calls.

Whatever the technology, gouging prison inmates and their families is both unfair and counterproductive, weakening family ties that could be critical to an inmate’s adjustment to the world beyond bars.

Leah spoke with the Valley Advocate about PPI's testimony in support of S 1171.

I spoke with the Valley Advocate for a new article on a bill to ban the routine use of physical restraints on incarcerated pregnant women after the first trimester, including during labor and delivery.

The bill was up for a hearing earlier this month, and we submitted written testimony urging the legislature add Massachusetts to the growing list of states that have rejected this inhumane and dangerous practice.

We’ll be reporting back with updates, so stay tuned!