Peter Wagner will discuss the hidden costs of mass incarceration on 2/10. 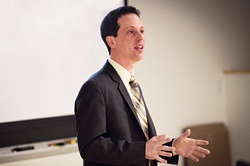 Wagner will discuss the hidden costs of mass incarceration for our democracy, our economy, and public safety. A 2003 graduate of the Western New England University School of Law, Wagner co-founded the Prison Policy Initiative in 2001, building an independent study project into a national movement against prison gerrymandering. His efforts have led to new legislation in four states including Maryland, where the law he helped write was affirmed by the United States Supreme Court. Wagner’s work has been featured in hundreds of newspapers nationwide, winning editorial endorsements for criminal justice reform from such publications as The New York Times> and the Boston Globe.

This lecture is free and open to the public. Hope to see you there!