Welcome to Civil Purgatory: A Review of Arresting Citizenship

In "Arresting Citizenship" Amy E. Lerman and Vesla M. Weaver take on the impact of mass incarceration on our democratic processes. 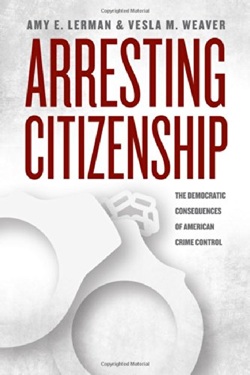 One of the young men interviewed by Amy E. Lerman and Vesla M. Weaver in their new book Arresting Citizenship says that the bias of crime control begins at birth: “we got that bull’s eye on our back as soon as we’re born.”

Lerman and Weaver explore how the criminal justice system warps the social and civic landscape of the United States. The experience of citizenship for an increasingly large group of Americans in this country is being shaped by a criminal justice system that does not necessarily protect them or their access to and expression of the rights that citizenship should guarantee.

“Civil death” has been used to describe felon disenfranchisement, but what the authors describe is much more far-reaching and insidious: a kind of civil purgatory to which a growing portion of our population is banished. In the wake of the protests following the events in Ferguson, Mo., with the extrajudicial killings of unarmed black people by police officers finally getting widespread (if not always sympathetic) news coverage, this book is especially timely.

Arresting Citizenship covers more than just those who pass in and out of correctional institutions, exploring the experiences of what Lerman and Weaver call the “custodial citizen”, a term that encompasses all those in contact with the criminal justice system. This includes anyone deemed a “criminal suspect”, a large proportion of whom “have never been found guilty of any crime in a court of law”, yet who are nonetheless subjected to searches, stops, frisks, detainment, invasions of privacy, and attacks from law enforcement officials. The justifications for such targeting, as evidenced by a study of police stops in New York, are largely circumstantial, but are frequently coded in blatantly racist and classist ways: e.g. “walking in a high crime area”, “wearing clothes commonly used in a crime”, etc. As a result, the overwhelming majority of custodial citizens are poor people of color. As Arresting Citizenship makes clear, the expansion of policing, and the increasing harshness of policing and sentencing, is not correlated with an increase in crimes being committed and in fact has little to do with actual crime rates.

The authors draw on both quantitative and qualitative research, including interviews with “custodial citizens”. The perspectives collected from their interviewees serve as a compelling framework for their quantitative findings; after all, they write, “Citizenship and democratic political standing are most appropriately measured not only by the laws in the books but also how citizens conceptualize their state and their place in it.” The collected stories reveal the way the criminal justice system actively isolates, stigmatizes, and disempowers custodial citizens, fostering alienation and fear.

Lerman and Weaver write that we must “…assess America’s criminal justice institutions by the extent to which their practices unnecessarily violate the democratic principles of voice, responsiveness, and accountability.” As the recent events in Ferguson and around the country offer a vivid, nightmarish example of the lack of accountability for law enforcement, this book offers rigorous and empirical context for why people across the country are expressing such outrage.

Arresting Citizenship is a powerful reminder of the work that needs to be done to preserve and expand the democratic principles of voice, responsiveness, and accountability.