With a little over 6 months left in his term, President Obama is on track to become the President who has granted the smallest portion of clemency requests in history.

Earlier this month, President Obama granted clemency to an additional 58 incarcerated people, bringing the total number of clemency petitions he has granted to 376. While the White House boasts that the President has commuted more sentences than all of the last six presidents combined, any celebration of President Obama’s record on clemency is extremely premature. As a percentage of petitions received (a measurement that I argue better represents a President’s clemency effort) President Obama’s clemencies are the stingiest in the 116 years of available data.

By my measure, the President could grant clemency to 2,000 people tomorrow and still have granted a smaller percentage than President Reagan.

To be fair, President Obama’s percentage is so low because a record number of clemency petitions have been received; but President Obama solicited those petitions through a new clemency initiative in 2014 and made their review a central part of his criminal justice reform agenda. The actual performance, however, is a serious disappointment. 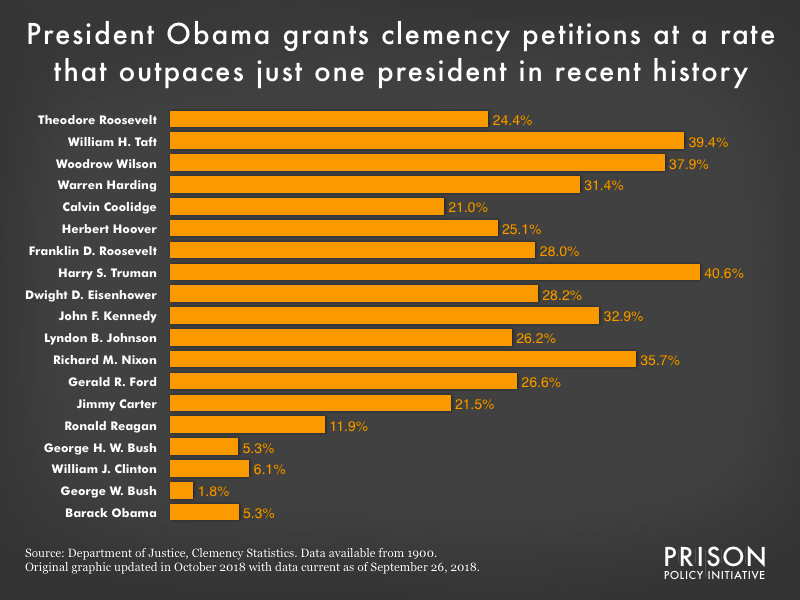 The Department of Justice has tracked the number of clemency petitions received and their outcomes since 1900. Using this data which includes the 58 clemency requests granted on May 5, 2016 by President Obama, I calculated the percent of clemency petitions that were granted (including pardons, commutations, and remissions) by each president since Theodore Roosevelt.

A different process was used the last time over 20,000 clemency petitions were received by the White House. President Ford convened a clemency board to review those charged with dodging the military draft during the Vietnam War. Ford’s Clemency Board was set up under an executive order (separate from the DOJ’s data graphed above), and its very operation was removed from the problematic pardon process that has complicated Obama’s effort.

In a great article on Fusion, Casey Tolan reports that over the course of a single year, President Ford’s board “reviewed 21,500 petitions and recommended that the president grant clemency to 14,514 of them.” That is an approval rate of 67.5%, even higher than Ford’s 26.6% of clemency requests granted through the DOJ process. No other president has convened such a board to review clemency petitions, despite it being suggested to the White House by law professor Mark Osler, and civil rights activist Nkechi Taifa in 2012 and 2013.

Part of why President Obama’s clemency initiative isn’t working is that it does the opposite of President Ford’s clemency board. Instead of making it easier to release those who have been punished by harsh War on Drugs policies, Obama created more layers of administrative oversight.

The process is failing so badly that the Pardon Attorney quit in January. Her resignation letter, obtained by USA Today was scathing, arguing that the DOJ & Deputy Attorney General:

With a little over 6 months left in his term, there is still time for President Obama to take broad and sweeping action on clemency. He needs to pick up the pace and change the structure to ensure that the next President doesn’t inherit “a sluggish and often intransigent review process” with unnecessary layers of bureaucracy.

Otherwise, the President’s grand intentions on clemency will leave him as the President who granted one of the smallest portions of requests for clemency in history. That’s not the legacy President Obama had in mind when he said that he would “make sure that more of our citizens – even those who have made mistakes — have a chance to become productive members of society and contribute to this country that we love.”

The graphic was updated October 5, 2018 to reflect President Obama’s final clemency record. His clemency program did “pick up the pace” at the very end of his presidency, ultimately granting 1,715 commutations and 212 pardons out of a total of 36,544 petitions received. The 1,927 total petitions Obama granted was the second-highest number granted through the DOJ process by any president since 1900, but this number still falls far short of his goal of 10,000.