Professor of Law Nora Demleitner explains why she joined the Prison Policy Initiative board. 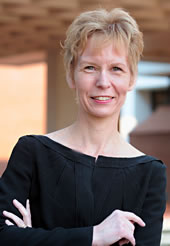 Why did you decide to join the Prison Policy Initiative board?

Nora Demleitner: Peter’s courage and vision impressed me when he started the Prison Policy Initiative. He is the model of a law graduate on a mission, willing to do what it takes to make a goal become reality. He has built the Prison Policy Initiative from a fledgling single-issue one-man operation into a multi-faceted research and advocacy organization with great impact. How could I not want to be working with a smart and insightful group of people on issues of enormous importance to the country?

Nora Demleitner: My research focuses on sentencing and collateral sanctions, often with a comparative angle. I have worked on sentencing issues for over two decades, after a law school sentencing seminar and the prison project there inspired me to learn more and to help bring a different attitude to our criminal justice system. I joined the Federal Sentencing Reporter as an editor, and later became the lead author on a casebook on sentencing, Sentencing Law and Policy.

On my collateral sanctions work, I initially focused on felon disenfranchisement and then turned to restrictions on sex offenders. I also looked at the panoply of collateral sanctions that make it virtually impossible for someone with a criminal record to be ever again recognized as a full member of our society. That perpetual exclusion carries a host of negative consequences for the individual, their families and communities, and ultimately for all of us.

Frequently I compare our practices to those of other countries, especially in Western Europe. Our punitiveness and our unwillingness to accept someone who made a mistake back into society stand out. We are our own worst enemy, and I want to support the Prison Policy Initiative in helping bring about necessary change. We need to learn from best practices here and abroad and infuse our criminal justice system again with humanity. Change is necessary as the current approaches too frequently penalize the poor and disadvantaged, minority and other diverse communities. Our criminal justice system cannot and should not be expected to remedy other social ills, ranging from failing schools to an ineffective mental health system.

Nora Demleitner: The Prison Policy Initiative is the mouse that roars. How can such a small organization, located outside the typical locations for successful not-for-profits makes such a difference? I credit Peter’s vision, the team he has built, tenacity and grit, an intuitive sense of how to proceed to make the most difference, and a drive for results. The Prison Policy Initiative has taken on topics of great import – the Census count of inmates or the actions of the prison phone industry, for example – and worked on changing unfair practices. That success breeds recognition and further success. It also focuses attention on exploitative and unfair practices in novel ways. The Prison Policy Initiative’s attention is as often focused on improving the lot of the individual offender and their families as it is on protecting core values of our society, such as equal representation.

It is exciting to see an organization that is constantly keeping an eye out for topics that fit its mission. In addition, the Prison Policy Initiative has been spreading its wings in other ways. The relatively recent addition of the Research Clearinghouse, a database of empirical criminal justice reports, is one such example. I love the e-mails that assure that I won’t miss leading reports and relevant information on a host of criminal justice topics.

What’s something that you wish more people knew about the Prison Policy Initiative?

Nora Demleitner: For the Prison Policy Initiative it is not about garnering accolades and acclaim. It is about results, about being a catalyst for positive change in the criminal justice area, and about distributing knowledge and insight.

Two things stand out for me: First, it has been invigorating to see how a single person with the drive to tackle injustice and abuse can do so successfully. What a role model Peter is! I wished more law students and young lawyers knew about him and his story.

Second, even those who may ideologically disagree or be uncertain about their position on some of the issues for which the Prison Policy Initiative advocates, should know about the Research Clearinghouse. It is an amazing resource, and I encourage everyone to sign up – today.

Supporting the Prison Policy Initiative makes you feel good because they get results on issues that matter.