New BJS data shows suicide is still the leading cause of death in local jails. And most suicides occur shortly after jail admission.

As we wrote last year, suicide in jails is an overlooked national crisis. The rate of suicide in local jails — which generally hold people detained pretrial or convicted of low-level offenses — is far greater than that of state prisons or the American population in general. 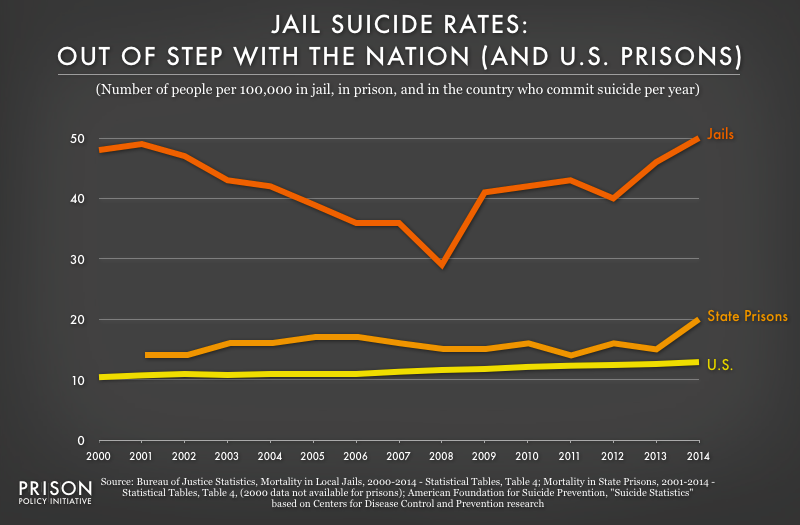 In comparison to prisons, local jails experience far higher proportions of unnatural deaths, which include suicides, drug/alcohol intoxication, homicides, and accidents. For example, in 2014, 11% of deaths in state and federal prisons were due to unnatural causes while almost half (49%) of deaths in jails were unnatural. There are a number of reasons for why this could be true such as the disproportionate number of people in jails suffering from mental health challenges or substance abuse or because people are sometimes being booked into jails in their most desperate state.

One positive consequence of Sandra Bland’s tragic 2015 death in a Texas jail has been increased attention on jail deaths. For example, the Huffington Post began a groundbreaking project gathering names, cause of death, dates of arrest and death, and other key details for more than 800 people who died in jails and police lockups in the year following Bland’s death. The Huffington Post’s jail deaths database builds on the Bureau of Justice Statistics annual reports to provide more in-depth information on this national crisis. The data shines light on the particular jails in the U.S. with above average numbers of deaths and tells the stories of the people whose deaths might have been initially missing from the mainstream media. 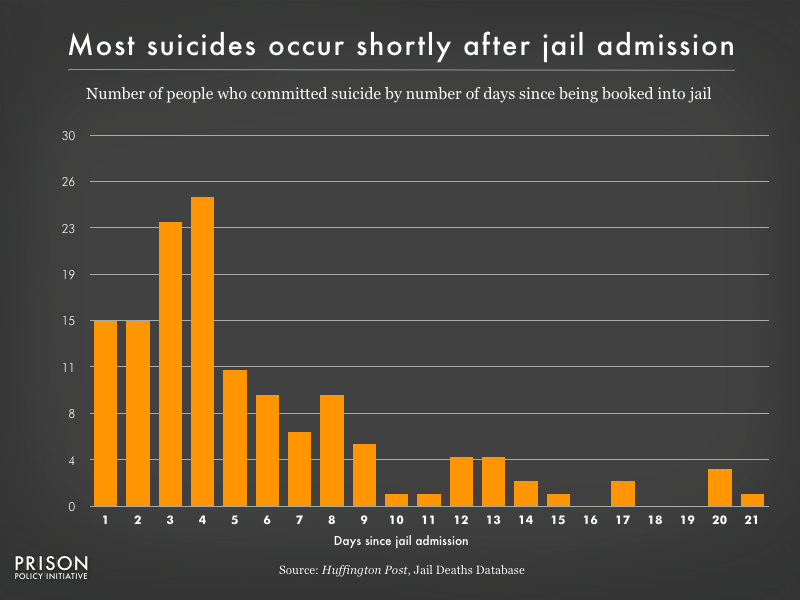 Studying the datasets raises urgent questions about the way that jails function such as whether jails are adequately evaluating mental health during intake, how jail staff communicates with family members of the incarcerated during periods of incarceration and when a death occurs, and whether there is appropriate oversight of the thousands of local jails in the U.S.

The data also raises broader, but just as pressing, questions about the dehumanizing experience of incarceration. The high rate of jail suicide should prompt our country to consider whether increasingly popular jail visitation policies that replace in-person visits with video will only increase the isolation of incarceration. The data also supports the idea that mental health services could be more effectively delivered in the community and renews the call for more programs that divert people with mental illness from going to jail in the first place. Further, the high number of suicides that occur within the first few days since jail admission emphasizes why the detention of those awaiting trial, even for a few days, should be treated as a human rights crisis.

Jail suicides are yet another example of how interactions with our criminal justice system can become questions of life or death.