Home Page > BJS report: Drug abuse and addiction at the root of 21% of crimes

BJS report: Drug abuse and addiction at the root of 21% of crimes 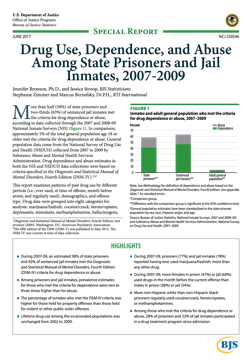 A new Bureau of Justice report released yesterday reveals that 21% of sentenced people in state prisons and local jails are incarcerated for crimes committed to obtain drugs or money for drugs. Almost 40% of people locked up for property crimes and 14% of those incarcerated for violent crimes reported that they had committed their most serious offense for drug-related reasons. If these figures hold for the entire prison and jail population, that means over 473,000 people are behind bars for seeking drugs.

“Drug Use, Dependence, and Abuse Among State Prisoners and Jail Inmates, 2007-2009” details past drug use of incarcerated people surveyed in the National Inmate Surveys. Some of its other major findings include:

We already know that overcriminalization of drug use and possession contributes to mass incarceration, resulting in 1 million arrests each year. Responding to substance use as as an individual failure to be punished, rather than as a public health problem, is just as harmful. The widespread drug use and dependence among incarcerated people underscores the urgent need to redirect people and resources away from prisons and jails and toward more effective treatment. Treating underlying issues in a therapeutic setting is more cost effective and has better results when it comes to health and public safety. And as the new BJS report suggests, it’s also essential for reducing the incarcerated population.

This predatory industry wants to literally stand in between the incarcerated and their families by replacing human contact with computer chats.