Massachusetts amended its constitution in 2000 to deny prisoners the right to vote. Out of a population of 4.9 million people of voting age, the amendment affects less than 15,000 people. But it creates a stark racial disparity that was likely not intended by the voters. 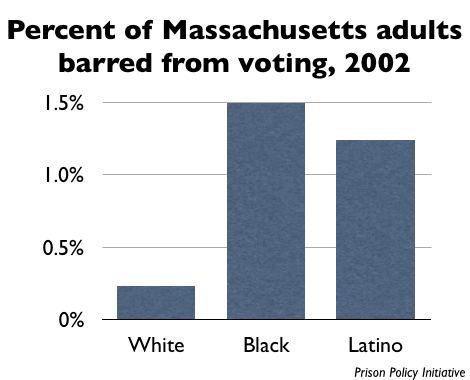 Massachusetts amended the state constitution in November 2000 to bar prisoners from voting. This was the first time the constitution was amended to take away rights from a group. Prior to disenfranchisement, few prisoners actually voted. The impetus for the Amendment was an attempt by prisoners to organize a Political Action Committee to defeat then-Governor Paul Cellucci. Prisoners and their families are among the poorest residents in the state, so it is difficult to see the PAC as a credible threat to the governor. The Amendment passed the legislature and a public referendum without receiving much public debate on either side.

Although the number of people subject to disenfranchisement in Massachusetts is small, the implications are large. The 2000 election and recent partisan gerrymandering controversies have damaged the public's view of the link between voter participation and democratic representation. The creation of a new disenfranchisement scheme in 2000 makes matters worse because it tells the communities that have suffered historic exclusion from the ballot box that they are, in fact, still not welcome.

In an era where the right to vote is continually being expanded, that surely can not be the message that Massachusetts intended to send to its citizens.

Peter Wagner is Assistant Director of the Prison Policy Initiative, an Open Society Institute Soros Justice Fellow, and a 2003 graduate of the Western New England College School of Law.

This research was supported by a grant from the Soros Justice Fellowship Program of the Open Society Institute. Marty Rosenthal, Rebecca Young, Peter Costanza and Alec Ewald provided invaluable encouragement, research assistance and feedback. Responsibility for the methodology and any errors that may have resulted reside solely with the author.

The Prison Policy Initiative (PPI) conducts research and advocacy on incarceration policy. Its work starts with the idea that the racial, gender and economic disparities between the prison population and the larger society represent the grounds for a democratic catastrophe. PPI's concept of prison reform is based not only in opposition to a rising rate of incarceration, but in the search for a lasting solution to pressing social problems superior to temporarily warehousing our citizens in prisons and jails.

The Prison Policy Initiative is based in Northampton, Massachusetts. For more information about PPI or prison policy in general, visit http://www.prisonpolicy.org.

Article of Amendment CXX of the Massachusetts Constitution bars from voting "persons who are incarcerated in a correctional facility due to a felony conviction" and this report draws on a variety of sources to identify this population.

Demographics of Massachusetts prisoners in state correctional facilities were drawn from Massachusetts Department of Correction, "January 1, 2002 Inmate Statistics", tables 1 and 2. The state population for January 1, 2002 was calculated by averaging the Census Bureau estimates for July 1, 2001 and July 1, 2002. Voting age populations were calculated by applying the percentage of each racial and gender group that was over the age of 18 as reported by Census 2000 to the January 1, 2002 estimates.

Making the analysis more complicated is the fact that Massachusetts also incarcerates many felons with short sentences in county Houses of Correction, which have a different record keeping system.