At your request, we have reviewed the literature on detention, policing and courts to identify what a better criminal justice system in New Orleans might look like. This is not intended to be a final or comprehensive document, but rather a first step for your grassroots consultations and strategizing in New Orleans.

We hope you find this report helpful, and we thank you for the opportunity to assist New Orleans rebuild in a more just fashion. 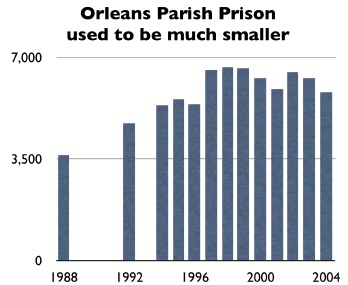 Historically speaking, prisons for punishment are a relatively modern invention, but jails to hold people awaiting trial are not. That said, the massive growth of jail systems nationwide is itself recent and more the result of policy changes than changes in crime patterns.

Currently, jails are used for 3 purposes: 1. to hold people who must be confined while awaiting trial, 2. to hold people serving relatively short and minor sentences, and 3. to hold people on a contract basis for other jurisdictions. As will be discussed, these are not necessarily legitimate uses of jails, but it is how they are used and these are the components of any discussion of capacity.

Many government agencies believe they can make a small profit incarcerating prisoners for other jurisdictions while retaining the flexibility to later fill those cells with local prisoners when needed. This is not only a fiscally risky proposition, it requires the Parish to construct and staff the prison prior to filling it with prisoners. Given the tight fiscal situation in New Orleans, rebuilding the capacity of Orleans Parish Prison to host prisoners from other parts of the state should not be a priority.

Similarly, the Parish should not be in the business of renting prison cells to federal agencies. According to our analysis of a 2001 survey of jails, another 231 prisoners, or 4% of the population, consisted of various types of federal prisoners.[3]

The Orleans Parish Prison population could also be reduced by policy changes that would make it easier to release defendants who are awaiting trial. These reforms will be discussed in more detail in the courts section of this report, but we will confine here ourselves to discussing the numerical importance of this issue. According to the 2001 survey, almost 36% of the Orleans Parish Prison population has not been convicted and are awaiting trial.[4] Based on the research in to detention reform in other states, most if not all of these 2,120 pre-trial women and men could safely be released to their home communities. Assuming conservatively that the per day cost of incarceration to Orleans Parish is the same $35.48 that the state Department of Corrections spends system wide, releasing all pre-trial detainees could save the parish more than $75,000 per day.

It's difficult to say how big Orleans Parish Prison should be, but we can easily see how much smaller it could be without changing a single line of the criminal code. By getting out of the business of renting out cells to the state and federal governments and by ensuring that almost all pre-trial defendants are able to be released on bail, the Orleans Parish Prison population could be 75% smaller, holding less than 1,500 people.

Having shown that the Orleans Parish Population could be much smaller, it might be useful to show that how far Orleans Parish Prison is out of the national norm. Rather than just compare New Orleans to the handful of cities of similar sizes, we analyzed the 49 of the nation's 50 largest jail systems to see how large each was compared to their resident populations.

Holding population constant, New Orleans has the largest jail system in the country, and is almost as twice large as its nearest competitor: Baltimore City, Maryland. Even subtracting the almost 2,000 state prisoners in the Orleans Parish Prison, Orleans Parish's jail incarceration rate would still be the highest in the country at 820 prisoners per 100,000 parish residents. See Table 1.

(Large numbers of external prisoners in a local jail can distort the statistics, so we excluded Reeves County, Texas from the 50 largest jail systems we studied. Reeves County is a very small county with slightly more than 10,000 residents but it operates its local jail as a huge privately run prison. The resulting numbers imply that that county locks up 18% of its population which is not the case. Since the actual numbers were not readily available, we excluded this county from the analysis.)

What cities would be best to compare New Orleans to is a political question that you should decide from Appendix A about cities of similar sizes, from the below Table 1 and from your own work in the region. You will know best what cities would be most politically appropriate to compare New Orleans to, and the use of rates rather than raw numbers allows comparisons to cities of different sizes. For the sake of argument and because New Orleans officials have proposed making the police department the same proportional size as the New York Police Department, we thought it would be interesting to set the capacity of Orleans Parish Prison at the same proportional size of New York City's Rikers Island jail. If New Orleans wants to be a scaled down version of New York City, the Orleans Parish Prison should have only 979 cells in it.[5]

But regardless of what city you choose to compare New Orleans with, the Orleans Parish Prison is far too big.


By share of population in jail, New Orleans has the largest jail system in the nation.

[1] Louisiana Department of Public Safety and Corrections statistics [PDF] as of March 31, 2005, page 7

[5] It is obvious that some cities have lower jail incarceration rates than others. But rather than show that some cities have very low rates, it might be more effective to pick the cities that you think policy makers might be most apt to want to model themselves after. To form the sentence "If New Orleans used jail as a frequently as [city], Orleans Parish Prison would have only [cells]" take the jail incarceration rate for that city, multiply it by the Census 2004 population for New Orleans (462,269) and then divide it by 100,000. On the calculator, that's [jail rate] * 462,269 / 100,000 = .

[6] Bureau of Justice Statistics, U.S. Census Bureau and calculations by the authors.