Thoughts on processing fees in the jail telephone industry

Some additional observations about prison phone fees, based on discussions we had with the phone companies after the report’s release.

In our report, Please Deposit All of Your Money: Kickbacks, Rates, and Hidden Fees in the Jail Phone Industry, we catalog the many fees customers pay at every step of the way, including fees for making deposits, keeping accounts open, and getting refunds. Our report puts these fees in a larger context, and discussions we’ve had since the report’s release lead us to some additional observations about fees. In our report, we wrote:

To be sure, businesses in many industries incur some processing costs by accepting credit or debit cards in person, via the internet, or over the telephone.65 Businesses usually respond by setting minimum purchase levels for a take out food order, charging a slightly higher rate per gallon of gasoline, or by simply writing it off as the cost of doing business. But this section of the report suggests that prison telephone companies may be approaching the question from the other end: providing telephone services in order to make money by charging extra fees. Indeed, because the commission system reduces the potential for corporate profit from the telephone calls, fees that should be no more than supplemental income are turned into a central source of profit.

END_OF_DOCUMENT_TOKEN_TO_BE_REPLACED

As a result of the report, at least two companies, Turnkey and NCIC, made several clarifications and improvements to their fee policies.

Several phone companies have been keeping busy in the couple of weeks since we released our new report exposing the hidden fees in the prison phone industry, mostly for the better.

I’m proud to report that, as a result of the report, at least two companies, Turnkey and NCIC, made several clarifications and improvements to their fee policies:

END_OF_DOCUMENT_TOKEN_TO_BE_REPLACED

The Massachusetts Executive Office of Public Safety and Security claim that “the department has received no public feedback about the plan” to begin using dog sniff searches to screen prison visitors is, at best, incorrect

We were concerned as soon as we heard about the Massachusetts Department of Corrections’ plans to start using dogs to screen families and friends visiting loved ones in prison. After all, encouraging in-person visits is key to allowing incarcerated people to maintain the family and community ties that are central to success after release. Using dogs to search family members, friends, clergy, volunteers, and other visitors is deeply invasive and degrading, and can turn essential family visits into potentially traumatizing experiences.

We (along with many other concerned Massachusetts residents) told the Department of Corrections, the Executive Secretary of Public Safety, and the Governor’s Office that the dog sniffing policy is a terrible idea. And on April 10th, the Boston Globe Editorial Board warned the Department of Corrections about the grave consequences the policy could have.

So, we were very surprised to read in a recent Valley Advocate article that Terrel Harris, spokesman for the Executive Office of Public Safety and Security, claims that “the department has received no public feedback about the plan.” It’s clear that this statement is, at best, incorrect, as we’ve clarified in a Letter to the Editor printed in this week’s issue.

The message is being sent loud and clear: the public knows that this policy will unnecessarily deter family visits and thereby make it harder for people released from custody to successfully rejoin their communities. The dog sniffing policy has already been put on hold; it should be canceled outright.

Please Deposit All of Your Money: Kickbacks, Rates, and Hidden Fees in the Jail Phone Industry 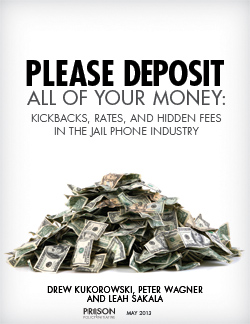