Can you make a gift today to fuel the movement to end mass incarceration?

Here at the Prison Policy Initiative, we know that in order to keep winning victories for fairness and justice, the movement to end mass incarceration needs compelling and up-to-date information about the U.S. incarceration crisis. This year, we’ve continued to fill critical gaps in the movement’s knowledge with exciting reports that:

These reports were made possible by the generosity of a small group of individual donors. Can you make a gift today so we can both advance specific campaigns for justice and produce critical research?

To encourage you to give generously, some of our existing donors will match the first $19,000 that we receive in this appeal.

We thank you for standing by our side in the fight for fairer and safer communities for everyone.

How do the campaign contributions of the prison phone industry compare to those of the private prison industry?

The Voice of OC has revealed that $85,000 in campaign contributions to two Orange County, California county supervisors by Global Tel*Link flipped the two supervisors from being opponents of charging families high phone rates into supporters.

The Voice of OC articles are a must-read (first article, second article), and they have a video showing the dramatic change in positions:

We’re thrilled to see more investigation of the phone companies using campaign contributions to purchase influence. We broke the first story of this type in August, with our exposé that found that Securus was one of the largest contributors to the sheriff’s reelection campaign in Sacramento, California. Notably, this is a county where Securus did not have the contract, but clearly wanted to be the winning bidder when the contract was next put out for bid.

How big is $85,000 in campaign contributions, exactly? To be sure, it pales in comparison to the $4 million/year in kickbacks that the contract would give to the Orange County slush fund called the “Inmate Welfare Fund”. (Despite the name, the funds can be used for almost anything, and as the Voice of OC article says, most of it is spent on staff salaries.)

On the other hand, $85,000 was apparently enough to change these two votes in this one county. And it’s a massive sum when you compare it to the outrage that was aimed at Hillary Clinton after The Intercept reported that bundlers associated with the private prison industry were supporting her presidential campaign with similar amounts of money. (ColorOfChange says that the total received by the Clinton campaign from the industry was $133,000.)

It’s stories like this that illustrate two points we’ve been making a lot lately:

New infographic & report: How does women’s incarceration in your state compare to countries across the world?

Report reveals that every US state incarcerates women at higher rate than most countries, shows growth of women's incarceration in the US over the last century. 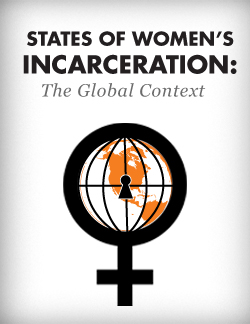 Easthampton MA — How does your state compare to the international community when it comes to incarcerating women? Not very well, says a new infographic and report from the Prison Policy Initiative.

The report, “States of Women’s Incarceration: The Global Context,” shows that every American state is out of step with the rest of the world.

“Our analysis shows that even states which seem to incarcerate women less than others in the U.S. are in fact incredibly punitive once that isolationist worldview is broadened,” said Aleks Kajstura, Legal Director of the Prison Policy Initiative. “Every single state incarcerates women at a rate that far exceeds international norms.”

This report is the first to directly put individual U.S. states’ rates of incarcerating women in the global context. The report draws on international statistics from the London-based Institute for Criminal Policy Research, state-level data from the U.S. Census Bureau for interstate and international incarceration comparisons, and historical data from various sources for a detailed look at the U.S.’s past record on women’s incarceration.

The Prison Policy Initiative found that nearly 30% of the world’s incarcerated women are imprisoned in the U.S. even though only 5% of the world’s women live here. Overall, with the exception of Thailand and the U.S. itself, the top 44 jurisdictions throughout the world with the highest rate of incarcerating women are individual American states.

In Illinois, the incarceration rate for women is on par with El Salvador, where abortion is illegal and women are jailed for having miscarriages. New Hampshire is on the same level as Russia, and New York with Rwanda.

“The statistics revealed by this report are simple and staggering” the report concludes. “They suggest that states cannot remain complacent about how many women they incarcerate. Women should be a mainstay of any state policy discussions on the economical and effective use of incarceration if we hope to incarcerate fewer women.”

The non-profit, non-partisan Prison Policy Initiative produces cutting edge research to expose the broader harm of mass incarceration, and then sparks advocacy campaigns to create a more just society. This report was prepared by Aleks Kajstura, Legal Director of the Prison Policy Initiative, and Russ Immarigeon, an independent researcher and editor of the two-volume set, Women and Girls in the Criminal Justice System: Policy Strategies and Program Options (Civic Research Institute, 2006, 2011).

For further information, contact Aleks Kajstura at akajstura [at] prisonpolicy.org.

The report recommends 14 guiding principles for re-framing the U.S.’s approach to electronic monitoring, concluding that:

In the present context, there is little evidence to support EM as a genuine alternative to incarceration. At the same time, EM is not going to go away, especially with the constantly expanding capacity of devices to track and gather other data. If decarceration gathers steam, EM will become an important option. Before that happens, the debate around its use and implications needs to sharpen. Any useful framing must open up a dialog around the rights of the monitored and link EM to state and corporate surveillance. Otherwise, we run the risk of hundreds of thousands of people being virtually incarcerated in their homes and of the net widening to track many more who have not even had an encounter with law enforcement.

A point by point summary and full report are available here.

John Oliver explains another broken aspect of the criminal justice system, re-entry. Oliver illustrates the various ways that we set formerly incarcerated people up to fail, from restrictions on housing and employment to the rolling back of Pell grants. According to Oliver, because of the resounding and bipartisan support for enacting barriers to re-entry during the tough-on-crime era, we should all feel responsible for the lack of opportunity available to people trying to turn their lives around.