New report, What “Stop-and-Frisk” Really Means, argues that a return to stop-and-frisk would be a policing disaster

President Trump supports stop & frisk; but Black and Latino people know from experience that the result is discriminatory use of force.

President Trump’s push for tougher policing is dangerous for Black and Latino communities, who bore the brunt of police use of force under stop-and-frisk in New York.

Easthampton, Mass. – Donald Trump’s presidency has heralded a return to ineffective “tough on crime” tactics, including the police practice of stop-and-frisk, but a new report by the Prison Policy Initiative finds that such a move would be disastrous for Black and Latino communities. “Instead of making cities safer, stop-and-frisk causes thousands of forceful and terrifying experiences with police, mostly for people of color who’ve done absolutely nothing wrong,” charges Rose Lenehan, author of the report.

In What “Stop-and-Frisk” Really Means: Discrimination & Use of Force, Lenehan analyzes the racially disparate use of force in police stops in New York City in 2011. That year was the peak of stop-and-frisk in the city, and two years before a federal judge found that the practice was racially discriminatory and violated the rights of hundreds of thousands of New Yorkers. “We all know that stop-and-frisk targeted Black and Latino communities in New York, but that goes beyond who police chose to stop,” explains Lenehan. “Police were also more likely to use physical force when they stopped people of color than when they stopped white people.” 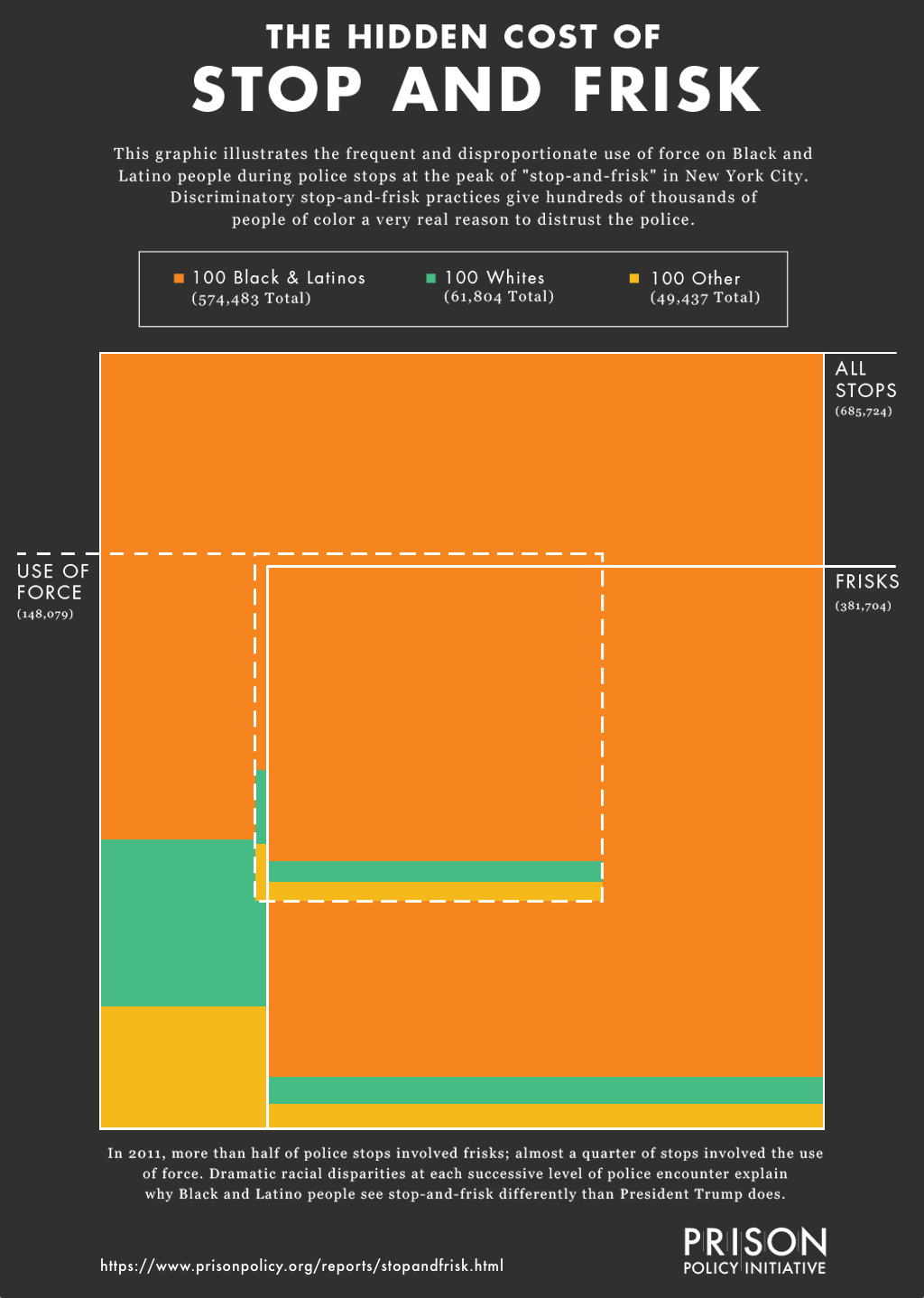 In 2011, the NYPD stopped Black and Latino people nearly 575,000 times and used physical force against them almost 130,000 times. That’s 84% of all stops and 88% of all force used in stops that year. Yet despite President Trump’s mistaken perception that “it was so incredible, the way it worked,” only a small number of weapons were seized in these stops – mostly knives. Police found weapons in only 1% of stops of Black and Latino residents, but found weapons nearly twice as often when they stopped Whites. As the new report argues, stop-and-frisk succeeds only in alienating vast numbers of city residents from the police, and ultimately creates more problems for public safety.

The report features an innovative data visualization that layers each successive level of police encounters – stops, frisks, and use of force – to show racial discrimination impacts decisions more serious than simple stops. The graphic is drawn to scale (a tiny square is equivalent to 100 New Yorkers) to illustrate the massive impact of stop-and-frisk on the street. According to Lenehan, “With roughly almost 2,000 stops per day, concentrated in Black and Latino communities, stop-and-frisk gave hundreds of thousands of people of color reason to distrust the police.”

The non-profit non-partisan Prison Policy Initiative was founded in 2001 to expose the broader harm of mass criminalization and spark advocacy campaigns to create a more just society. The organization produces big-picture data publications like Mass Incarceration: The Whole Pie to help people fully engage in criminal justice reform. The author, Rose Lenehan, is a PhD candidate at MIT and a member of the Prison Policy Initiative’s Young Professional Network.

The new report is available at https://www.prisonpolicy.org/reports/stopandfrisk.html