Easthampton, Mass. – States have made impressive progress over the last 10 years in reducing their prison populations, but for most women in prison, this progress might as well never have happened. Even as men’s incarceration rates are falling, women’s incarceration rates hover near record highs, a trend driven by criminal justice decisions at the state level. A new report from the Prison Policy Initiative identifies more than 30 states driving this national “gender divide.” 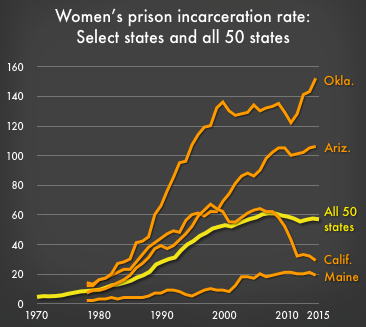 The mass incarceration of women has severe and far-reaching effects: 62% of women, for instance, are separated from minor children when they are put behind bars. But though this is largely an issue of state policy, “few people know what’s happening in their own states,” says Wendy Sawyer, author of The Gender Divide: Tracking Women’s State Prison Growth. Sawyer says states undermine their commitment to decarceration when their criminal justice reforms leave women behind.

The report features more than 100 state-specific graphs tracking 40 years of women’s prison growth, designed to help policymakers assess the need for local reform. It also isolates the underlying causes of women’s mass incarceration, including the War on Drugs, harsh sentencing for violent offenses, and the growing frequency of women serving jail time.

Women in prison are uniquely burdened by mental health problems and trauma, and Sawyer notes that most prisons, having been designed for men, “make those problems worse.” But she stresses that the appropriate response “is not to build better prisons – it’s to ensure women are included in reforms that move people away from prisons.” Most women in the justice system could be better served through alternatives to incarceration. Developing those solutions should be an urgent priority in every state.

How are women faring in your state? See the report and state-specific graphs https://www.prisonpolicy.org/reports/women_overtime.html.