New report, Arrest, Release, Repeat, reveals how many people go to jail each year and how many times they go

Our analysis reveals that at least 4.9 million people cycle through county jails each year - and most have serious medical and economic needs.

Police and jails are supposed to protect the public from serious public safety threats, but what do they actually do? Until now, attempts to answer this question have been missing the most basic data points: how many individuals cycle through local jails every year and who these individuals are. 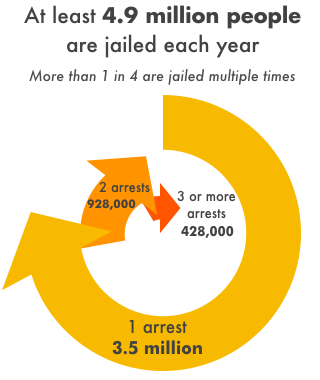 “4.9 million people go to jail every year — that’s a higher number than the populations of 24 U.S. states,” said report co-author Alexi Jones. “But what’s even more troubling is that people who are jailed have high rates of economic and health problems, problems that local governments should not be addressing through incarceration.”

The report reveals that: In a series of policy recommendations, the report explains how counties can choose to stop continuously jailing their most vulnerable residents and instead solve the economic and public health problems that often lead to arrest. “Counties should stop using taxpayer dollars to repeatedly jail people,” said report co-author Wendy Sawyer, “and use the savings to fund public services that prevent justice involvement in the first place.”