A law aimed at reducing children’s exposure to drugs should punish those specific crimes, not generalize about the nature of the activity within a huge area. Though the sentencing enhancement zone statute was written for an important purpose, its fundamental flaws ensure its complete ineffectiveness as a deterrent. In addition, it does insidious and devastating harm to urban, minority, and poor populations.

As Vermont’s example has shown, however, the legislation may be rewritten to improve public safety and eliminate the present inherent injustices. (See sidebar: Vermont’s unique sentencing enhancement zone statute emphasizes that the zone laws should be highly specific and only one of many responses to drugs.) Reform would allow the state to spend its limited criminal justice resources on effective policies, instead of squandering them on small-time addicts who do not endanger children.

In writing this report, we set out to discover whether the sentencing enhancement zone law punished certain populations more harshly because of where they live, and whether 1,000 feet was a logical or effective distance for a geography-based sentencing enhancement. We found that, despite the legislature’s good intentions, the first supposition was true and the second was not, resulting in a statute that is both harmful and ineffective. Here we identify three possible courses of action, all of which would improve children’s safety and reduce the law’s negative effects. The law may be amended to apply only to adults dealing drugs to children, it may be repealed entirely, or it may be modified so that the zones are shrunk to more reasonable sizes.

1. Amend the law to exempt people and behaviors outside the law’s purpose of protecting children from drug-dealing adults.

Simple changes could eliminate many of the current law’s inefficiencies and injustices:

These amendments — which already exist in many states[32] — would eliminate many situations where a long zone sentence would not enhance children’s safety, yet a judge must order it. However, these amendments would not cure the serious geographic flaws identified in this report.

2. Repeal the sentencing zone statute and enforce the existing laws which are narrowly tailored to deter the specific behavior of selling drugs to or in the presence of children. Depending on the drug involved, Chapter 94C, S32F provides for mandatory minimum sentences of at least two to five years for drugs sold to a person under the age of 18. Section 32K provides for a mandatory sentence of five years for “inducing or abetting minor to distribute or sell controlled substances.”

3. Modify the sentencing zone law so that it could work.

We argued above that the 1,000-foot distance was a fundamental flaw in the statute that prevented it from working effectively. In order for the law to function as a geographic deterrent, offenders must be able to identify the borders of the zones and be able to leave them without unintentionally stepping into others. The best way to ensure this is to limit the number of places that qualify for zone protection, limit the size of the zones themselves, and mark the borders clearly.

If the legislature retains the enhancement zones, we recommend reducing the zones’ size to 100 feet around schools and parks, so that they may effectively steer drug activity away from children. Unlike the current 1,000-foot distance, 100 feet is relatively easy to identify. Posting signs at the corners of the zone properties, explaining the zones and the penalty for violation, would be clear enough to work as a geographic deterrent.

Reducing the size of the school zones would also reduce the statute’s disparity in sentencing. We calculated the zones that would exist if the law specified a 100-foot distance and did not apply to Head Start facilities added in the 1998 amendments. As the map below reflects, sizable areas in Hampden County would still be eligible for the zone enhancement, but our research suggests that the racial disparity in sentencing would drop. Under such a statute, 6% of the county would be living in a zone. That population would be 6% White, 8% Black, and 9% Latino, a significantly smaller disparity. (See Table 3.) 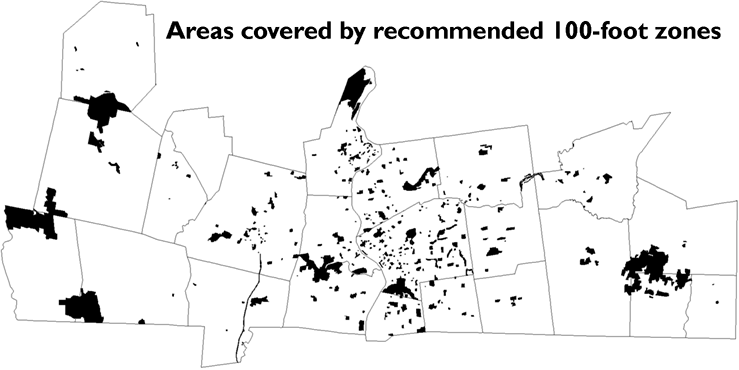 Figure 7. Shrinking the zones to 100 feet will make them more effective at moving drug dealing away from children and less harmful to Black and Latino communities.