Home Page > Reports > The Geography of Punishment > An 'urban effect'

The law’s poor construction also means that sentencing enhancement zone eligibility has less to do with one’s offense than the location of one’s home. Because they tend to live in urban areas and therefore more often live inside the zones, greater numbers of Blacks, Latinos and the poor are charged with zone violations than Whites who commit the same offenses. Additionally, because the statute dictates a two-year minimum sentence, judges are denied discretion in sentencing and must hand down punishments that are often disproportionate to the crimes committed.

In his Massachusetts study, Brownsberger found that most drug dealers are arrested near their homes, and that 73% of the defendants in enhancement zone cases lived within a zone.here." class="footnotereference">[23] In effect, the zone law frequently gives defendants an enhanced sentence because of where they live. Our analysis of Census Bureau data and the geography of Hampden County enhancement zones found that 36% of the county lives in a zone, but this population is disproportionately located in cities.

Our study of Hampden County found that residents of urban cities and towns are five times as likely to live in a sentencing enhancement zone as rural residents. The New Jersey Commission to Review Criminal Sentencing, which noticed a similar pattern in New Jersey, calls this phenomenon the “urban effect.” In Hampden County’s nine most urban cities and towns, 40% of the population lives in enhancement zones.[24] In the nine most rural towns, however, only 8% of the population does.[25] Though Census 2000 counted 121 school-age children in the town of Montgomery, for example, the town is so rural it contains no schools and few parks; none of Montgomery’s residents lives in an enhancement zone.

The evidence on children’s drug use does not justify an enhanced penalty for drug crimes committed in urban areas. Although the National Household Survey on Drug Use reports a small disparity in drug use between metropolitan and non-metropolitan adults, the federal survey reports that urban and rural children aged 12-17 use drugs at the same rates.[26] Drug usage is just as prevalent among rural schoolchildren, but urban communities receive the burden of the enhanced penalties. 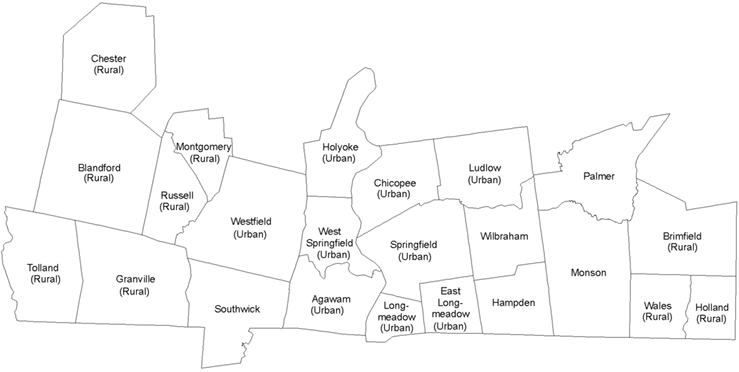 Figure 3. The cities and towns of Hampden County. 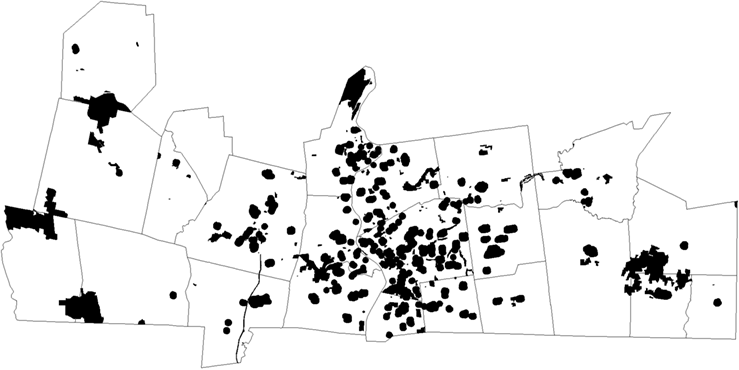 Figure 4. Hundreds of sentencing enhancement zones intersect, making drug defendants in urban communities subject to penalties not applied to defendants in rural areas, where the zones are infrequent. (The large zones in the rural areas are caused by state parks where few, if any, people actually live.)

Hampden County’s nine most rural towns are 97% White, while its nine most urban cities and towns are 71% White, 9% Black, and 17% Latino. Because Blacks and Latinos are more likely to live in urban areas, a law that enhances the sentences of urban residents does more harm to Black and Latino populations than to Whites.

Our analysis found that less than a third (29%) of White Hampden County residents live in enhancement zones, but that more than half (52%) of Black and Latino residents live in school zones. The difference exists even within cities and towns. In Holyoke, 45% of Whites live in zones, compared with 76% of Holyoke Latinos.

This racial disparity in the populations covered by sentencing enhancement zones is a large part of why almost 8 out of 10 people convicted of zone offenses in Massachusetts are Black or Latino.

While it is commonly known that the nation’s criminal justice system disproportionately incarcerates Blacks and Latinos, the Massachusetts sentencing enhancement zone law exacerbates the problem. Blacks and Latinos are only 12% of the state’s population, but 58% of the state’s prison population. Of those convicted of zone violations in 2004, 79% were Black or Latino. (See Table 2.) 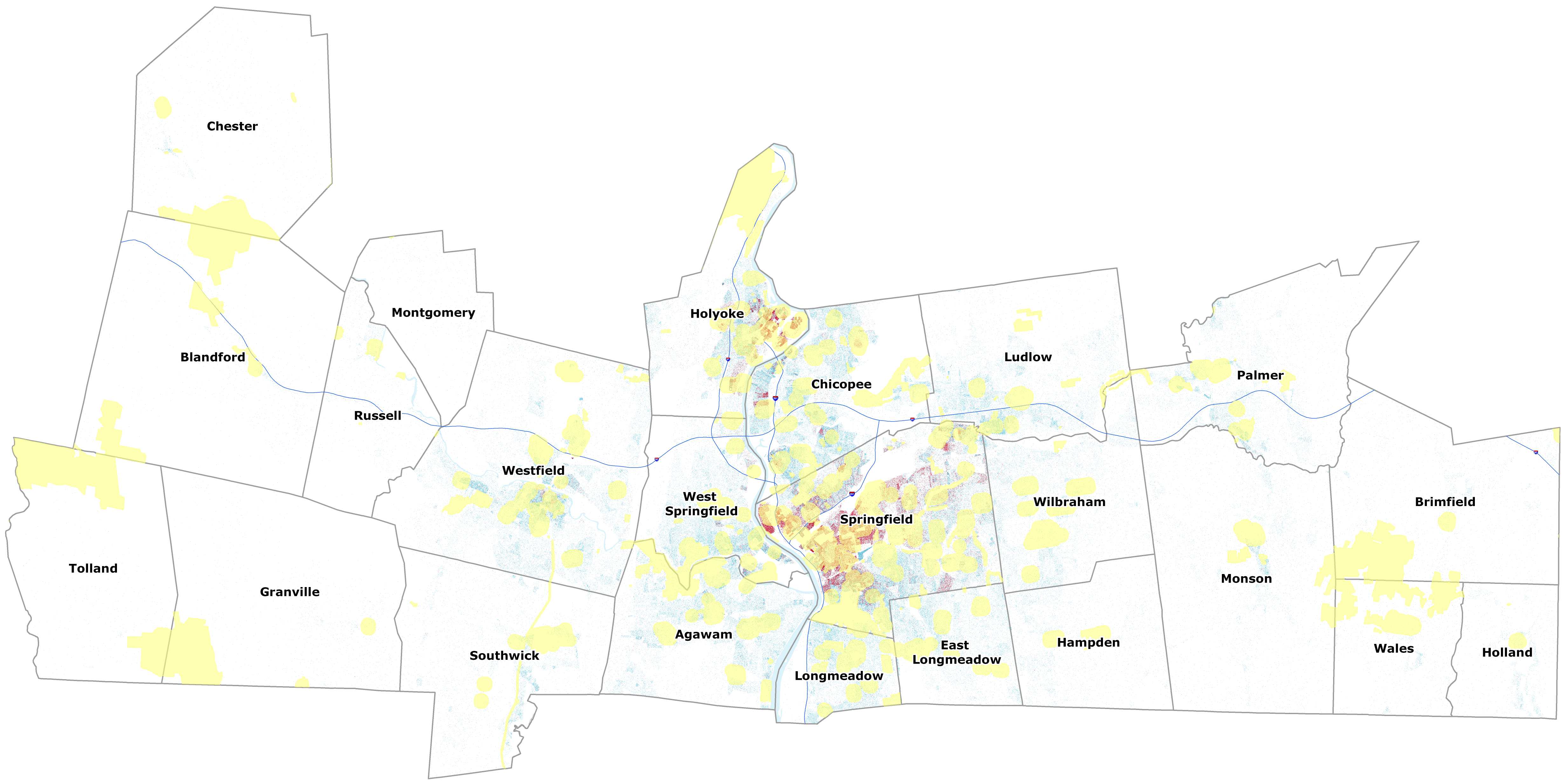 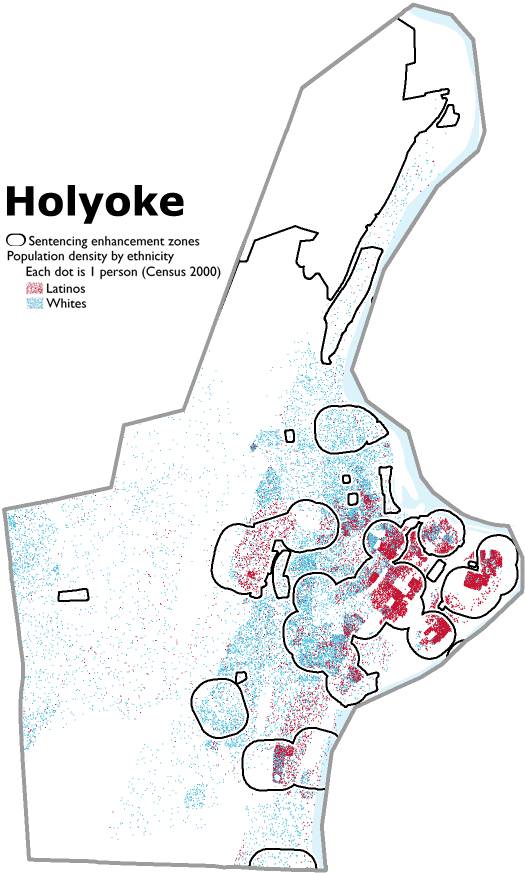 Figure 6. Holyoke has a higher percentage of Whites and Latinos in school zones than any other city or town in Hampden County. But Latinos (red dots) are still far more likely than Whites (blue dots) to live in a zone and be subject to the enhanced penalty.

The Legislature amended the sentencing enhancement zone law in 1998 to put 1,000-foot zones around accredited daycare and Head Start facilities. Our analysis found that adding Head Start facilities, which are located in low-income neighborhoods and specifically serve low-income families, disproportionately magnified the impact of the law on poor defendants.

In addition to disproportionately affecting urban, minority, and poor offenders, the law is so broad that populations who have not and would not sell drugs to children are receiving punishments aimed at those who do. Massachusetts judges who have noticed this discrepancy between sentence and offense have been working against the statute for several years.

In 1995, the Boston Globe surveyed 37 Massachusetts judges and found that nearly all agreed that “he or she has had to sentence a drug convict, because of the ironclad sentencing laws, to a term that was ‘too severe,’” and two-thirds said it happened frequently. Eighty-three percent said they had never sentenced a drug kingpin for zone violation, and 94% said they usually sentenced addicts, small-time dealers and couriers. “I know what the Legislature had in mind when it did this,” said Judge Cortland A. Mathers. “But it hasn’t worked. Not at all.”[28]

The Boston Globe survey was taken 12 years ago, but one critical fact suggests that judges still believe that the law unfairly requires them to apply harsh sentences to relatively minor offenses. In more than half of the 349 enhancement zone convictions in 2004, Sentencing Commission data shows that the judge sentenced the defendant to one day of jail time for the underlying offense.[29] Only two possible conclusions can be drawn from this fact: either the facts of the case reflect an insignificant offense and the judge gave the shortest sentence possible under the law, or the judge recognized that the two-year mandatory minimum was excessive and reduced the penalty for the underlying offense in an attempt to compensate for the injustice. Either way, many judges are aware that most of the population being sentenced under the legislation is not pushing drugs on children, as the legislature envisioned.

Furthermore, since 1982, Massachusetts has had specific penalties for selling drugs to children,[30] and in 1990, the legislature created a specific penalty for using children in the drug trade.[31]