New report, Youth Confinement: The Whole Pie 2019, breaks down where children and teenagers are locked up in the U.S., where, and why

At a time when cutting the adult prison population by 50% seems radical to many people, states have already cut the number of confined youth by 60% since 2000.

Why are 48,000 children and teenagers locked up in the United States, and where exactly are they? How are the juvenile justice system and the criminal justice system similar, and how are they different? In a new infographic and report, the Prison Policy Initiative answers these unexpectedly difficult questions about youth confinement. 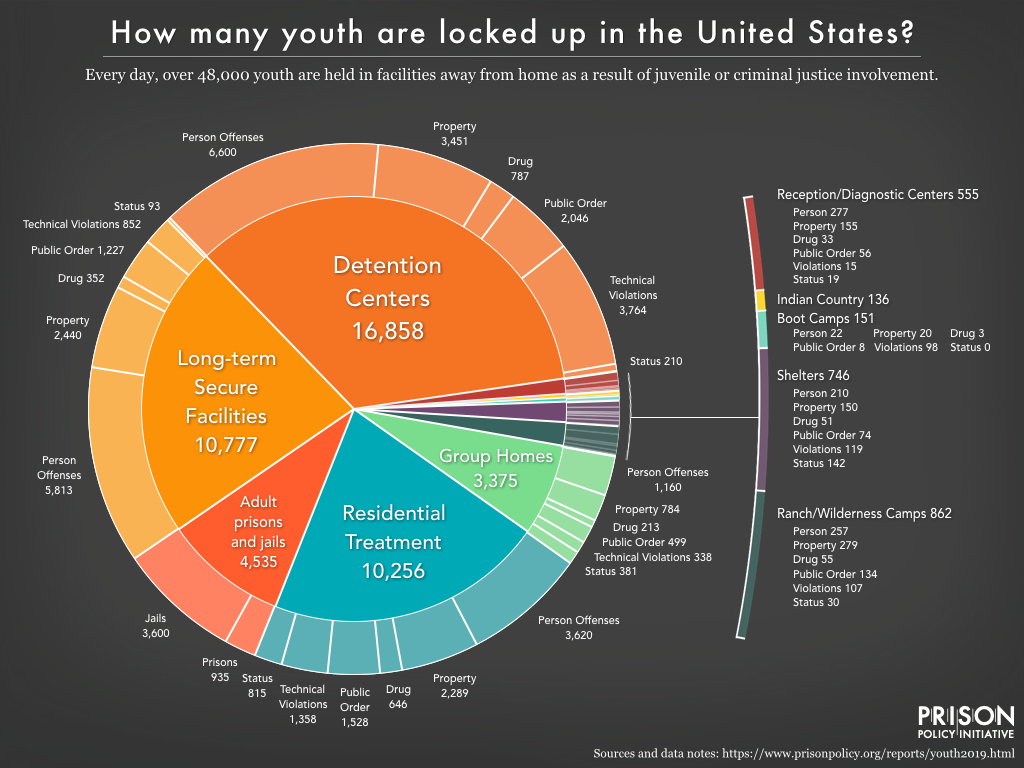 But the number of youth in confinement is also falling dramatically. “At a time when cutting the adult prison population by 50% strikes many people as radical, states have already cut the number of confined youth by 60% since 2000, and that trend is continuing,” said report author Wendy Sawyer. The report describes state reforms that have helped shrink the juvenile justice system, such as:

“States have reduced youth incarceration without seeing an increase in crime, which is very encouraging, but there are still far too many youth in confinement,” said Sawyer, “Today, there are 13,500 youth locked up away from home for drug possession and low-level offenses, not to mention 7,000 other youth detained before trial. That means this country still has a lot of work to do.”

For the full report and more infographics, see https://www.prisonpolicy.org/reports/youth2019.html.

New report: State-level criminal justice reforms that can win in 2020 State legislatures can determine the future of mass incarceration. That’s why we just published — as we do every December — a report on 20+ winnable criminal justice reforms that state legislators can take on.

We publish this report as a PDF with links to more information and model bills, and we’ll soon send it to state legislators across the country. This year, our list of reforms ripe for legislative victory includes:

Will your state be working on any of these reforms? We’re looking forward to the progress we can make together in 2020!