John Oliver does it again: How municipal violations can ruin lives

John Oliver does it again! Watch Last Week Tonight: Municipal Violations and learn more about municipalities that are senselessly locking people up for failure to pay traffic tickets.

You can now support PPI by donating stock or simply shopping at Amazon!

There are two additional ways to financially support the Prison Policy Initiative: While the FCC is still considering the scope of its regulation to reign in the exorbitant costs of calling home from prison and jail, we’re tackling another fee-driven industry preying on people who can least afford it.

The Consumer Financial Protection Bureau is now proposing tighter regulations of high-fee prepaid debit cards, and we’re lucky to have the help of volunteer attorney, Stephen Raher, to submit a comment from the Prison Policy Initiative urging the CFPB to extend its regulations to explicitly cover release cards.

The CFPB needs to act quickly because correctional facilities are increasingly using these expensive cards to repay people they release — money in someone’s possession when initially arrested, money earned working in the facility, or money sent by friends and relatives.

Before the rise of jail release cards, people were given cash or a check. Now, they are instead given a mandatory prepaid Mastercard, which comes with high fees that eat into their balance. These cards charge for basic things like:

To put this into perspective, if someone is released with $125, a $2-per-week maintenance fee is equivalent to a finance charge of 77% per year. If that same hypothetical cardholder makes ten purchases of $12 each, then a $0.50 per-transaction-fee would amount to $5, or 4% of the entire card balance (on top of maintenance fees). If the cardholder wishes to convert a prepaid card into cash, he or she must pay $10 to $30 (8% to 24% of the entire deposit amount) merely to close the account.

Stay tuned here for updates on the CFPB regulations, and in the meantime, check out our comment.

And thanks again to Stephen for drafting the comment! (You may remember Stephen from his work in rebutting local government officials who insisted that jail phone kickbacks were necessary.) If you’d like to join our growing group of skilled volunteers, check out our Young Professionals Network.

The Maryland Cecil Daily just published my letter to the editor about why county officials should immediately cancel plans to ban letters from home in the county detention center:

Social science research is clear that one of the best ways we can help people in jail succeed when they return home is by allowing them to preserve social ties to their families and communities. My Prison Policy Initiative report, Return to Sender: Postcard-only Policies in Jails, finds that jail letter bans sever these essential ties by outlawing the affordable and confidential family communication that takes place via letter.

For more on this issue, read the full letter and check out the Prison Policy Initiative resource page on protecting jail letter correspondence.

The demographics of computer ownership and high-speed internet access

The poor, the elderly, and African-Americans and Latinos are less likely to have computers or high-speed internet at home. Replacing regular jail visits with computer video chats is a bad idea.

As we explained in our report about the video visitation industry that wants jails to replace free in-person jail visits with expensive computer video chats, not everyone has computers at home or high-speed internet. It’s clear — and should be no surprise to industry leaders — that access is the most restricted in poor households, in African-American and Latino households, and in the homes of older people.

We used the poverty data in our report, but we thought graphing all of this data might be useful for our colleagues fighting proposals to replace traditional government services with mandatory internet-based services. Without a doubt, the internet is a great tool, but we are not yet in a world where we can assume that everyone has access to this technology. Massachusetts suspends driver’s licenses as punishment for crimes that had nothing to do with cars or road safety. Sound nonsensical? It is.

Last week I attended a legislative briefing at the Massachusetts State House to present my research on what might seem like an unlikely policy: driver’s license suspensions for crimes that had nothing to do with driving or road safety. Sound nonsensical? It is.

But for more than two decades Massachusetts law has been automatically suspending the driver’s licenses of everyone convicted of a drug offense — regardless of whether or not that offense involved driving or road safety. Then, if that wasn’t enough, this policy makes them wait at least six months and then charges them $500 or more to get their driving privileges back. Since the suspension policy is automatic, judges have no say in the matter.

As our report found, this suspension policy wastes taxpayer resources, makes our roads less safe, and fundamentally disrupts the lives of people with previous drug convictions who are trying to get back on track by meeting work, family, and other personal responsibilities. And we already have other laws that deal directly with road safety and illicit substances. 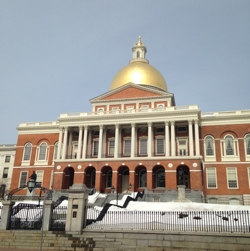 Fortunately, after more than two decades of losses under this failed policy, the Massachusetts legislature is poised to finally put its foot down. Massachusetts Senator Harriette Chandler and Representative Liz Malia are introducing legislation this session to end unnecessary drivers license suspensions for unrelated drug convictions.

Our friends at EPOCA are spearheading the effort to end unnecessary suspensions in Massachusetts, and you can learn more about the issue by reading our report: Suspending Common Sense in Massachusetts: Driver’s license suspensions for drug offenses unrelated to driving.