New report uncovers the cost of phone calls in over 2,000 locally-run jails across the U.S.

The movement for phone justice has won huge victories in state-run prisons, but people in jail pretrial are on the front lines of exploitation.

“Jails have managed to escape the political pressure that forced many prisons to bring their rates down,” said co-author Peter Wagner. “We found that many jails are charging three, five or even 50 times as much as their state’s prisons would charge for the same phone call.” The report explains how: 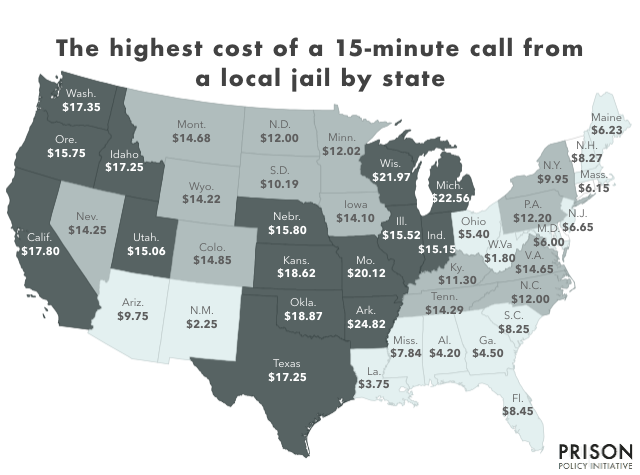 “High phone rates impact everyone in jail, but those worst affected are people detained pretrial because they cannot afford bail,” co-author Alexi Jones said. “When someone has to organize their defense from jail, the cost of phone calls becomes extremely limiting, and that ultimately makes our justice system less fair.”

On kickbacks and commissions in the prison and jail phone market

Phone providers are so creative in their influence-peddling that the most viable reform strategies do not focus only on "commissions."

The prison and jail phone industry is rife with problems – from sky-high phone rates to inexplicable consumer fees to expensive and unnecessary “premium services” – and all of these problems can be traced to a single moment in the industry’s history: When the companies decided to start offering facilities a percentage of their revenue in order to win contracts.

Before long, jails and prisons were prioritizing commissions over low rates when choosing a phone provider. This didn’t just saddle incarcerated people and their families with higher phone rates – it created two major problems for the companies, both of which have caused the market to spiral into dysfunction.

Prison phone companies started offering commissions to jails and prisons in order to win contracts from companies that didn’t offer them. What they didn’t expect was that sheriffs would become dependent on this new income. The companies were forced into an “arms race,” competing to give away more and more of their revenue from phone calls; the proffered commissions inched ever closer to 100%.

The companies had painted themselves into a corner: How do you make a profit when you’ve given virtually all of your revenue away? Their solution: Find another source of revenue and hide it from the facility’s management.

That’s why, today, prison and jail phone companies have learned to sustain themselves with revenue entirely separate from phone rates. The first of these hidden sources of revenue is consumer fees – fees to deposit money, open accounts, or get a refund.

The second source of revenue is a suite of unrelated, profitable services that the companies bundle into phone contracts, such as money transfer, commissary sales, video calls, emails, etc. Most recently, the New York Department of Corrections and Community Supervision signed a contract for over 50,000 “free” tablet computers, alongside its phone contract with Securus. (The tablets are, of course, not “free” for incarcerated people and their families, who pay to use the tablets and are generating millions in profit for Securus.)

Smart Communications promises the impossible. (What could go wrong?) Source: Screenshot from http://www.smartcommunications.us

Smart Communications promises the impossible. (What could go wrong?) Source: Screenshot from http://www.smartcommunications.us

The most extreme – and telling – example so far of the prison phone market’s reliance on extra services comes from a provider named Smart Communications. This year, the Florida-based company began marketing to facilities on a promise of “100% phone commissions.” The catch should be obvious: The provider makes money by bundling other profitable services into the contract, and sharing none of this additional revenue with the facilities.

Such extravagant promises reveal what providers have been doing all along: promising higher and higher commissions by relying more and more heavily on ancillary services and fees to boost profits.

Gradually, the public has come to understand that there is an inherent conflict of interest when facilities award monopoly contracts and then reap a percentage of the revenue. As a result, the commission system started to fall out of favor. Some – though far from all – state legislatures started to prohibit percentage-based commissions.

But legislatures left open a critical loophole: They didn’t prohibit companies from offering all improper perks to facilities – only commissions.

Instead of paying a fixed percentage of their revenue to the facilities, the companies now use the extra revenue to issue kickbacks in other forms. From the perspective of the poor families paying for the calls, nothing has changed – phone rates remain high – but for the companies, disguising payments in this way makes it harder for journalists and advocates to track the kickbacks. These payments include:

As such, some of the prison and jail systems that have been widely hailed for refusing phone commissions do not, in our opinion, deserve the praise:

Not all hope is lost, of course. Sheriffs and legislatures still have the power to clean up this mess and make the prison and jail phone industry fair for consumers. But to do so, they’ll have to start evaluating phone contracts differently, focusing on more than just percentage commissions. Sheriffs and legislators should also ask whether:

Similarly, it can be really tempting to want to ban percentage commissions. We instead suggest two different ways to change the incentives behind these contracts:

Suggested reading for more on the topics here:

The cost of jail phone calls punishes people in the most desperate circumstances, most of whom have not been convicted of a crime.

It’s easy to see how people in state prison, who spend years or decades behind bars, are hurt by the cost of phone calls. But less obvious is how people in jail, who are usually behind bars for much shorter periods, can be hit even harder by the same cost.

The answer has to do with why people are in local jails in the first place. In many cases, it’s solely because they are poor. On a given day, 3 out of 4 people held in jails under local authority have not even been convicted, much less sentenced. Very often, they simply cannot afford the bail amount set by the court as a condition of release. (Men in jails reported earning a median of $17,676 per year before incarceration (in 2018 dollars). For women, the median pre-incarceration income was just $11,184 per year, well below the poverty line.)

When people can’t get together the funds to get out of jail, exorbitant phone rates only make a difficult time even harder. Pretrial detention is an extremely stressful experience; detainees are often at risk of losing their jobs, housing, and even custody of their children. Being locked up, even for a short time, can interrupt medical care and can exacerbate mental health problems. It’s no coincidence that suicide risk is highest in the first week of jail incarceration. Calls with loved ones are essential for people under these conditions, who may need to coordinate childcare or elder care, make arrangements for missing work, have prescriptions brought to the facility, or simply have someone to talk to while incarcerated. Expensive phone calls further punish people in jails – most of whom, again, have not been convicted of a crime.

Even beyond the potential damage to one’s health and personal affairs, pretrial detention also negatively affects case outcomes, and it’s in this way that high phone rates from jails do the most harm to the justice process itself. People who can’t afford money bail are forced to organize their defense from jail, where it is much harder to contact people who can help – and the cost of calling them from jail is even more limiting. In a 2016 opinion in a case about the proper use of phone calls in pretrial processes, Judge Jenny Rivera acknowledged the difficulty of preparing a defense while detained:

People detained pretrial are more likely to plead guilty just to get out of jail, more likely to be convicted, and more likely to get longer sentences. Costly phone calls play a central role in this injustice by limiting how often and how long pretrial detainees can talk to their families and friends in the service of their defense. This makes it harder for defense attorneys to coordinate with family to build mitigation cases or track down witnesses. As a result, pretrial detainees often present a weaker defense than they would have if they had been able to make calls freely (or better, had not been detained in the first place).

Furthermore, on a systemic level, high phone rates from jails hurt indigent defendants by draining already-scarce resources from public defenders’ offices. As the Missouri State Public Defenders explained in a letter to the FCC, these offices pick up the tab for phone calls from clients in jail, which can add up to tens of thousands of dollars every year. In the long term, they say the cost “reduces our ability to communicate with our clients about their cases, diminishes the quality of representation we are able to provide, and thus risks denying clients their Sixth Amendment right to effective counsel.”

So jail phone companies (and jails themselves, which get kickbacks on these calls) are essentially subsidized by public defenders – and by extension, taxpayers – while public defenders are left with even fewer resources to help indigent clients. Ultimately, this, too, makes conviction more likely.

But, wait, you might ask, if you’ve been paying attention to this issue: Didn’t the government solve this problem years ago? Didn’t the FCC limit how expensive phone calls from correctional facilities could be?

The cost of these calls continues to get less attention from regulators, journalists and the public than it deserves. There’s an irony in that: When poor people in jail can’t afford to make phone calls, the fairness of the justice system is distorted – and everyone pays an outsized price.