Reaching too far, coming up short:

Massachusetts requires that certain drug offenses receive a mandatory minimum sentence of two years’ incarceration if the offense occurs within a 1,000 feet of a school. These sentencing enhancement zones were intended to serve as a geographic deterrent in order to protect children from drug activity; identifying specific areas where children gather and driving drug offenders away from them with the threat of an enhanced penalty.

But evidence collected shows that the law hasn’t worked; that because the zones were set so large it can never be expected to work, and that the law comes at enormous social and economic costs. However, the simple fix of changing the size of the zones would drastically reduce these costs.

Two decades of experience with the zone law have proved that it is not in fact protecting children from drugs. Drug usage among children is not falling. Drug arrests are not less frequent inside of the zones than outside them. Zone law prosecutions only rarely involve situations where children are present.

By creating a separate punishment for drug offenses that occur near schools, the legislature wanted to move existing illegal behavior to where children are not present. However, setting the distance at an expansive 1,000 feet ensured that the law could not operate as intended. Large zones may have sounded tougher, but the results were inevitably weak.

The 1,000-foot zone law fails to repel drug activity from schools while having a fiscally and socially devastating impact on the state of Massachusetts. Each year, the zone enhancement law accounts for 796 years of imprisonment on top of the sentences imposed for the underlying drug offense. With the state facing a $3.1 billion shortfall and incarceration costing the taxpayer $47,679 for each prisoner each year, the state can ill-afford this kind of inefficiency.

At the same time, it creates an unfair two-tier system of justice: a harsher one for dense urban areas with numerous schools and overlapping zones and a milder one for rural and suburban areas, where schools are relatively few and far between. Laws biased against urban areas fall most harshly on Black and Latino populations, but drug usage statistics do not support punishing these communities more harshly. Federal government surveys show that urban and rural people, and Blacks, Latinos and Whites, all use drugs at roughly the same rates. 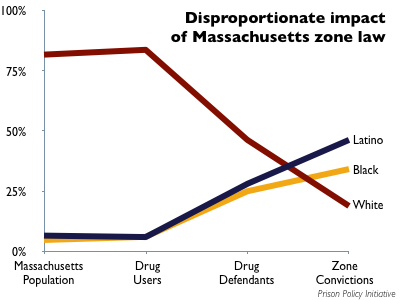 The harsher penalties that Black and Latino offenders receive under the zone law is unwarranted by statistics on drug use by race. Although Blacks, Whites, and Latinos use illegal drugs at approximately the same rate,[11] the poor construction of the zone law causes minority populations to disproportionately bear the burden of the harsher sentences (See Figure 1).

The law makes Blacks and Latinos far more likely to receive the enhanced penalties based solely upon where they live; and is the key cause of a stunning racial disparity in who goes to prison for sentencing enhancement zone violations. Blacks and Latinos are less than 13% of the state, but together account for 80% of the zone convictions. Compared to White residents of Massachusetts, Blacks are 26 times as likely to be convicted and receive a mandatory sentencing enhancement zone sentence, and Latinos are 30 times as likely. The geographic disparity that is inherent in this law’s application creates an extreme racial disparity in convictions.

The legislature had the right idea to make the areas around schools safer for children. But their initial law failed to determine the most effective distance. However, a number of proposals in the most recent and current legislative sessions would address the fundamental flaw in their original effort: the zones are too large. By dropping the zones to 100 feet, they would exempt from the harsh — and expensive — mandatory minimum sentence the vast majority of minor offenders who pose no threat to children. At 100ft, the law’s bias against urban areas would largely be greatly reduced. At that distance, the zones could effectively serve as a geographic based deterrent and encourage existing drug crimes to take place further from the schools.