We are hiring a Senior Engineer to take day-to-day and long-term responsibility for our website and internal technology. Apply today.

As an undergraduate sophomore studying comparative politics at Smith College, this nonprofit granted me skills that exceeded my expectations. 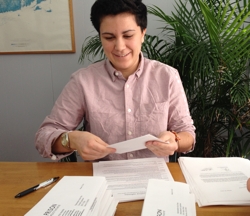 Over the month of January, I worked full-time with the Prison Policy Initiative for three consecutive weeks. As an undergraduate sophomore studying comparative politics at Smith College, this nonprofit granted me skills that exceeded my expectations and any of my previous experiences with research.

Before working with PPI I had been building a potential passion for prison justice. In my prior work with the legal department at El Sol Neighborhood Resource Center, I became more aware of racial profiling and its effect on immigrant communities. That same summer the Trayvon Martin case sparked protests against Stand Your Ground laws. I delved into documentaries, such as The House I Live In, and flipped through The New Jim Crow as I began to think about these issues within the context of mass incarceration. Although I had become engaged in these issues, I had not yet developed an agenda to act upon this interest.

As soon as I heard about the Prison Policy Initiative, I got in contact with a friend interning with them. I browsed their website and was impressed by their presence on social media pages. I did not have a strong idea what prison gerrymandering was before coming across the Prison Policy Initiative, but I quickly found videos of Executive Director Peter Wagner explaining this and other concepts central to this nonprofit’s mission.

My first project was creating a state legislator outreach database. Our goal was to find state legislators that have passed “progressive” bills relating to PPI’s efforts in order to have them as a contact regarding these issues in the future. Through this project I became more fluent in the bill-making process. While I understood that the War on Drugs and related legislation significantly contribute to the United States’ alarmingly high incarceration rate, I also became familiar with bills addressing mental health of incarcerated people, lowering the size of drug free zones, repealing mandatory minimum sentences, decriminalizing marijuana and other “soft” drugs, and requiring racial impact statements.

By individualizing each letter, the initiative could quickly connect with the legislator. The last thing we wanted was to spam them with generic pages of information because it would simply waste both the legislator’s and our time. I was surprised at how much thought went into the legislator’s response on behalf of Peter and Leah, who guided me through this project. At the end of my time with PPI, we sealed 200 customized letters and sent them to their respective offices.

My second project with the Prison Policy Initiative was crosschecking their internal Locator database against census data to ensure that correctional institution populations match up. Locator files are organized by state, giving the incarcerated population for census blocks and matching these blocks to specific facilities. This is essential to PPI’s work for identifying and addressing circumstances of gerrymandering.

So how do you find prisons? State and Federal facilities are much easier to find online than local facilities (i.e. county jails). Florida’s Department of Corrections actually has great and up-to-date information on their state and local facilities. These were extremely useful when matching up incarcerated populations. Apart from the Locator tool, the Initiative has extensive resources that allow you to look at facilities for each state through Google Earth and Google Maps among other excellent features.

Most of the research I did at PPI used tools to navigate raw data with rather than swimming through secondary sources, as I had been used to within my academic endeavors. Although this intimidated me at first, I received tremendous support from the staff at PPI.

Throughout my time here, I continuously felt like an equal — intellectually and on a personal level. For example, since I am focusing on comparative politics in my studies, I was asked to give feedback on an upcoming project on international incarceration rates. First of all, I thought this was a great idea to publish on the website. But I was really pleased that my opinion was so valued by a strong non-profit like PPI. This sentiment did not fade throughout my time here.

At some point, every staff member at PPI pulled me aside to show me what they’re working on. I read letters from incarcerated people who came across the Prison Policy Initiative, was asked for feedback on an upcoming presentation, and was introduced to Peter Wagner’s favorite books about American criminal justice system. Even on my last day of work, I was encouraged to chime in on conversations about PPI’s next moves.