In this new video, our Board President, Eric Lotke talks about his new novel, Making Manna and the connection to the struggle for prison phone justice and the Prison Policy Initiative: With 2014 drawing to a close, we review our biggest wins. Thank you for helping us come so far!

2014 was a year of big victories for the Prison Policy Initiative. We published some insightful new reports, reshaped the criminal justice reform debate through the press, and won a prestigious award, but most importantly our campaigns took some very big steps forward and in some cases we took those victories all the way to major policy changes.

Thank you for helping us do all of this work. Here’s to an even more successful 2015!

Our favorite news stories about our work in 2014

Today, we share the most important news stories of 2014 that we played a role in

Yesterday, we published our list of the best investigative criminal justice journalism of 2014. For that list, we decided to exclude any story that we were featured in or involved with in any way. Today, we share the most important news stories of 2014 that we played a role in:

As 2014 winds to a close, the Prison Policy Initiative recognizes the eight sorely needed investigative news stories that did the most to bring public attention to criminal justice reform.

As 2014 winds to a close, the Prison Policy Initiative wanted to recognize the eight sorely needed investigative news stories that did the most to bring public attention to criminal justice reform. In no particular order:

Eight ideas for criminal justice reforms that are ripe for legislative victory. 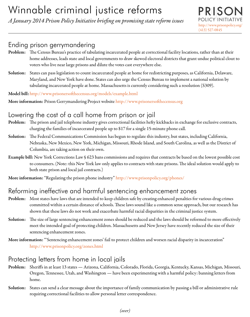 With the 2015 legislative sessions about to start, it’s time to unveil our second annual list of under-discussed but winnable criminal justice reforms.

The list is published as a briefing with links to more information and model bills, and it was recently sent to reform minded state legislators across the country. The reform topics we think are ripe for legislative victory are:

Let us know what you think of this year’s list. We look forward to working together to make 2015 a year of great progress for justice reform!

Generous friends have agreed to match any donations to PPI through 2014, making your gift go twice as far.

The national movement for fair prison and jail phone charges is making progress by leaps and bounds. The Federal Communications Commission’s first ruling is already lifting some of the burden of exorbitant phone bills, and the Commission just opened up a new comment period asking the public to weigh in on comprehensive reform that would protect ALL families with incarcerated loved ones from the predatory prison phone industry (more on that below!).

The Prison Policy Initiative has been at the forefront of these major historic victories, holding the billion dollar prison phone industry accountable with lots of hard work and the support of individual donors like you. This is so important that we are going to put every dime we raise through the end of the year towards this urgent campaign.

Please join us in fighting for fair phone charges for families on this Giving Tuesday by making a donation to the Prison Policy Initiative. Generous friends have agreed to match any donations to PPI through the end of the year, making your gift go twice as far. Then, please help to spread the word by forwarding this post to four friends, and/or Tweeting something like:

Thank you for your generosity!